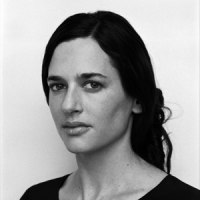 Taryn Simon, born in New York in 1975, is a multidisciplinary artist who has worked in photography, text, sculpture, film/video, and performance.

Her father and grandfather both worked extensively with image and text, as she does. She first pursued environmental sciences at Brown University but quickly transferred to a degree in art-semiotics, simultaneously taking photography classes at the neighboring Rhode Island School of Design. She received her BA in 1997. She has been a visiting artist at institutions including Yale University, Bard College, Columbia University, School of Visual Arts, and Parsons School of Design.

Simon's works have been the subject of monographic exhibitions at Ullens Center for Contemporary Art, Beijing (2013); Museum of Modern Art, New York (2012); Tate Modern, London (2011); Neue Nationalgalerie, Berlin (2011); and Whitney Museum of American Art, New York (2007). Permanent collections include Metropolitan Museum of Art, Tate Modern, the Guggenheim Museum, Centre Georges Pompidou, and the Los Angeles County Museum of Art. Her work is included in the 56th Venice Biennale (2015). She is a graduate of Brown University and a Guggenheim Fellow. Simon lives and works in New York.