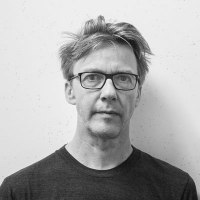 Marcus Taylor was born in Belfast in 1964. He grew up in Northern Ireland before attending Camberwell School of Art (BA) and The Slade School (Postgraduate). He has exhibited widely in the UK and abroad including the Saatchi Gallery and the British Art Show. His work has been collected by several major institutions including the Tate, Fondation Cartier and private collectors. He has worked on large scale projects including a bridge over Paddington Basin with engineers Buro Happold.

Recently he has collaborated with Caruso St John Architects on a proposal for the UK Holocaust Memorial, one of 10 shortlisted projects. He has been awarded a RIBA East Award, RIBA East Small Project Award and has been nominated for the RIBA House of the Year for a collaborative project with Lisa Shell Architects. This was also commended in the 2017 Architectural Review House award. He lives and works in London.