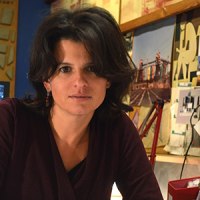 Sofia Tsiraki (born in Athens, November 1970) is working as an Assistant Professor (and a PhD candidate) in the department of Architectural Design in NTUA. She has won first prizes in a range of architectural competitions, while some of her realized projects have earned several distinctions. The "House-box: Private residence and space of cultural activities in Koukaki" has been nominated for Mies Van der Rohe award 2013. The project “The dissolution of the box: Apartment block in Gazi" has been awarded with the Hellenic Institute of Architecture First Prize 2013 for the best realized project throughout the years 2009-2013. She has served as editor and contributing author in three collective publications, and participated in several architecture exhibitions. She is co-owner of the "Anastassios Biris Architectural Office".