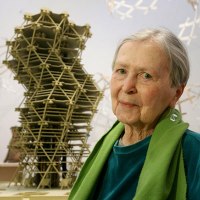 Anne Griswold Tyng (Lushan, China, July 14, 1920 - December 27, 2011) was an architect and teacher known, among other things, for her struggle for the emancipation of women in the field of the artistic profession.

Due to the sabbatical year her father took, in 1938 Anne traveled with her family to the United States. She was the fourth daughter of this American Episcopal missionary. Later he would return to stay permanently in this country.

After graduating from Radcliffe University, Anne Tyng would be, in 1942, one of the first women to receive an architecture award from Harvard University, Massachusetts (1944). He studied with Walter Gropius and with Marcel Breuer.

After his academic training, Tyng worked with Konrad Wachsmann in New York (1944), with the industrial design firm of Van Doren, Nowland, and Schladermundt (1944), and in the office of Knoll Associates (1944-1945).

Anne Tyng was a woman who learned architecture and worked with some of the best architects, which made her take a place in the modern history of architecture.