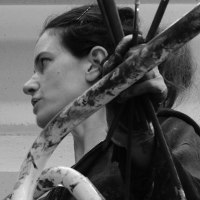 Helen Verhoeven (1974) is a Dutch/American painter and sculptor based in Berlin (Germany). Verhoeven grew up in the Netherlands and moved to the US in 1986. She received her BFA from the San Francisco Art Institute in 1995 and her MFA from the New York Academy of Art in 2001. In 2005-2006 she attended the Rijksakademie in Amsterdam and since 2009 she lives in Berlin. She received the Dutch Royal Painting Prize (Koninklijke Prijs voor Vrije Schilderkunst) in 2008 and the Wolvecampprijs in 2010. Her work has been exhibited internationally in institutions such as the Bonnefantenmuseum, Saatchi Gallery, Kestnergesellschaft, Stedelijk Museum Amsterdam, Gemeentemuseum Den Haag, the Essl Museum, and the FLAG Art Foundation.