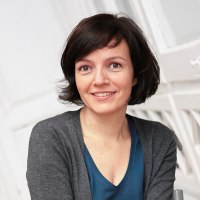 Since 2017 she has combined professional practice in her own office, developing architecture and design projects, with teaching at ESDAP Catalunya.