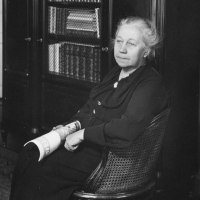 Olivia Mathilda Lönn, (May 20, 1872, Onkiniemi, Finland - December 27, 1966, Helsinki, Finland) also known as Wivi Lönn, was a Finnish architect. She was born on 20 May 1872 in the village of Onkiniemi, near Tampere, where she graduated from the Tampere Industrial School. Years later she moved to Helsinki, where she studied architecture at the Polytechnic University. She was the first independent practicing architect in Finland.

In 1904 she won the first architectural prize in a competition at the Tampere School of Economics. From 1909 to 1913 Wivi Lönn and Armas Lindgren designed and built the Estonian Theatre. In 1942, together with other colleagues such as Elsi Borg, she founded the Official Association of Finnish Women Architects, which is still active today. Between 1944 and 1945 the architect-designed her last building, the Tähtelä Observatory.