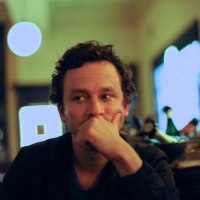 Guillaume Yersin (Vevey-CH, 1981), architect and urban designer (Msc.Arch. ETH Zürich, 2009) from Geneva, Switzerland. Guillaume also has a Bachelor in Human Medicine from the University of Geneva (2003).

After working for Lacaton&Vassal in Paris (2006), he took a decisive part in AMO's contribution for the Venice Biennale 2006 (The Gulf) and the following book AL Manakh (2007). He's been working for Prof. Kees Christiaanse at the ETHZ, as an active part of the research branch. Following that,  on a grant from ETHZ, he spent 6 months of research in Tokyo. He's currently working on a publication based on a serie of interviews made with the biggest real estate developers in the Japanese capital. He's been developing his work as a architect and urban designer working for Hosoya&Schaefer as well as for HelsinkiZürich Office.

Since 2010, he is member of "1to100architects" in Geneva. With 1to100, he has been an active part of RECLAIM, Golden Lion at the Venice Biennale 2010, and recently completed NOMAD, a temporary public installation in the garden of the Museum Quai Branly in Paris.

He's currently working on a intervention in the city of Biel, Switzerland, together with BASK, from Zürich.

He recently joined the leading team for Christ&Gantenbein's contribution at the next Rotterdam Biennal 2012, Making City.