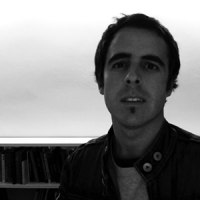 He is currently developing his PhD “Atmospheres” at the DPA department of the ETSAM. He has been visiting lecturer at Würzburg University, Germany, as well as the VI Architecture Workshop for the Fundación Marcelino Botín, Santander, associate lecturer with Blanca Lleó for the Post-grad Master degree at ETSAB University and visiting lecturer at El Vallés Architecture School and jury at Harvard GSD for Career Discovery 2002.

His work has been recognised and awarded at the 2011 XI Spanish Architecture and Urban Design Biennale. He has also been awarded with the first prize for the Huesca Congress Hall, the Castilla y Leon Pavilion for the 2008 Zaragoza Exposition, Baghdad Olympic City, third prize for the Leganés Sports Management Centre, Special Mention for the Taboadella Europan 10, First Mention for the Herrera del Duque Tourism Hospice and Mention for the Castuera Tourism Hospice. His work has been selected for several exhibitions such as the FUCOAM gallery, the 2010 Hay Festival, the 2006 and 2008 Huesca CCM, La Casa de los Picos 2010, Fachhochschule Münster (2002), Fachhochschule Würzburg (2001), Cáceres Congress Hall (2010 y 2011) or the Magda Bellotti Art Gallery (2002). At present, he is developing a project for the abstraction of atmospheric water for Fuerteventura and Atacama, and is member of the Cultural Landscape Investigation Group at ETSAM.
.