Other house by Jean Prouvé (1948) and other video showing the montage. Always interesting and intelligent. 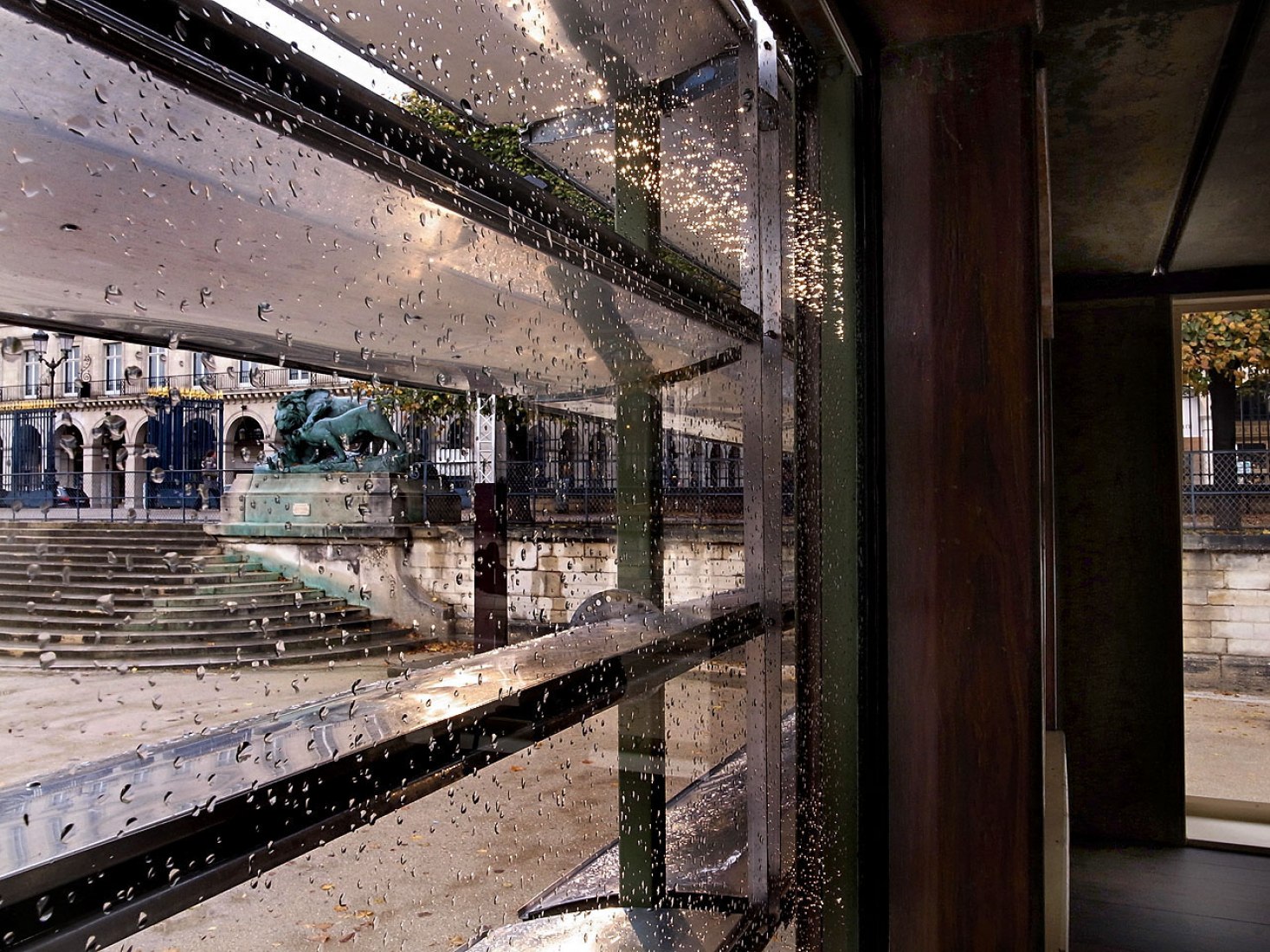 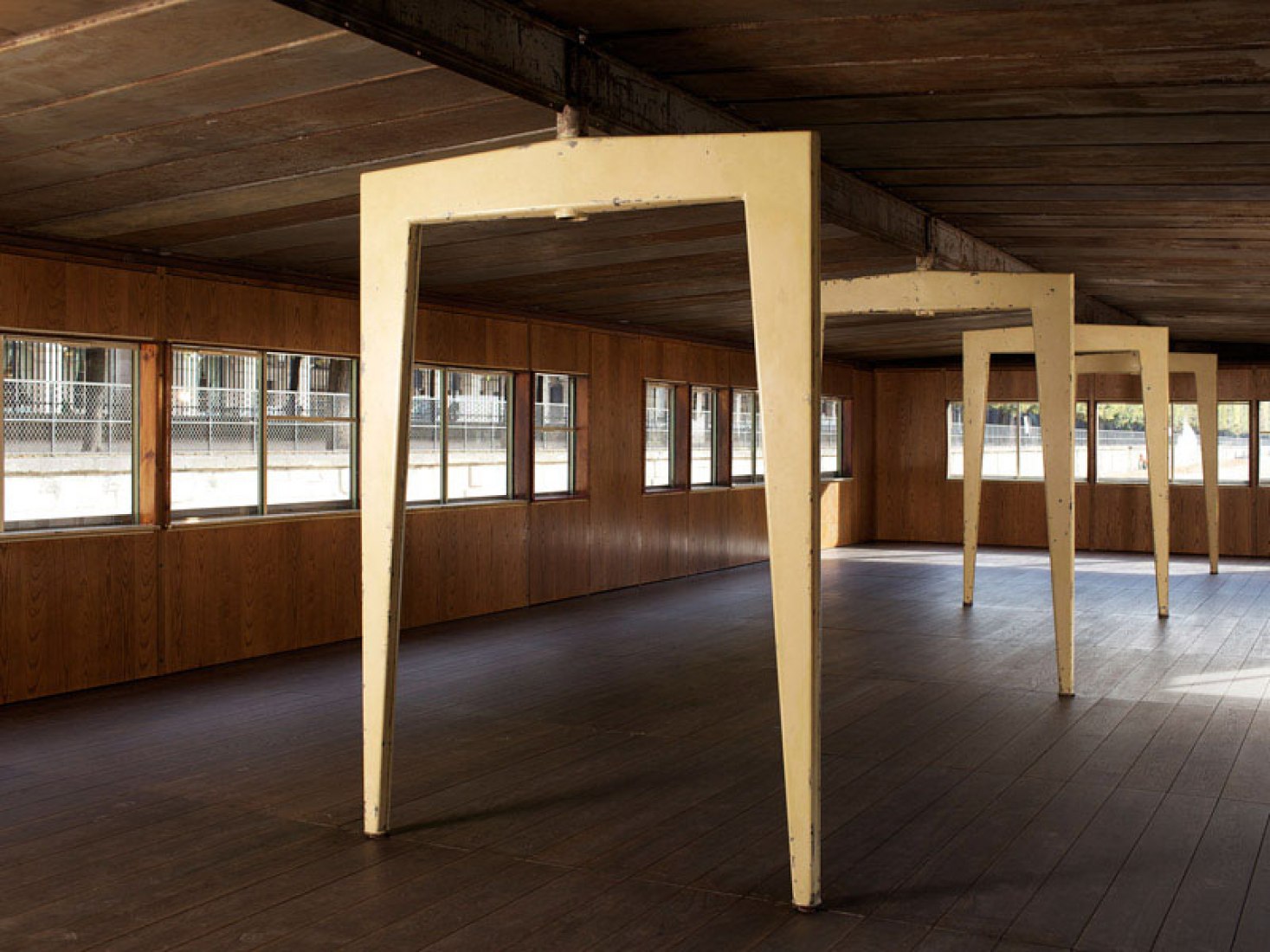 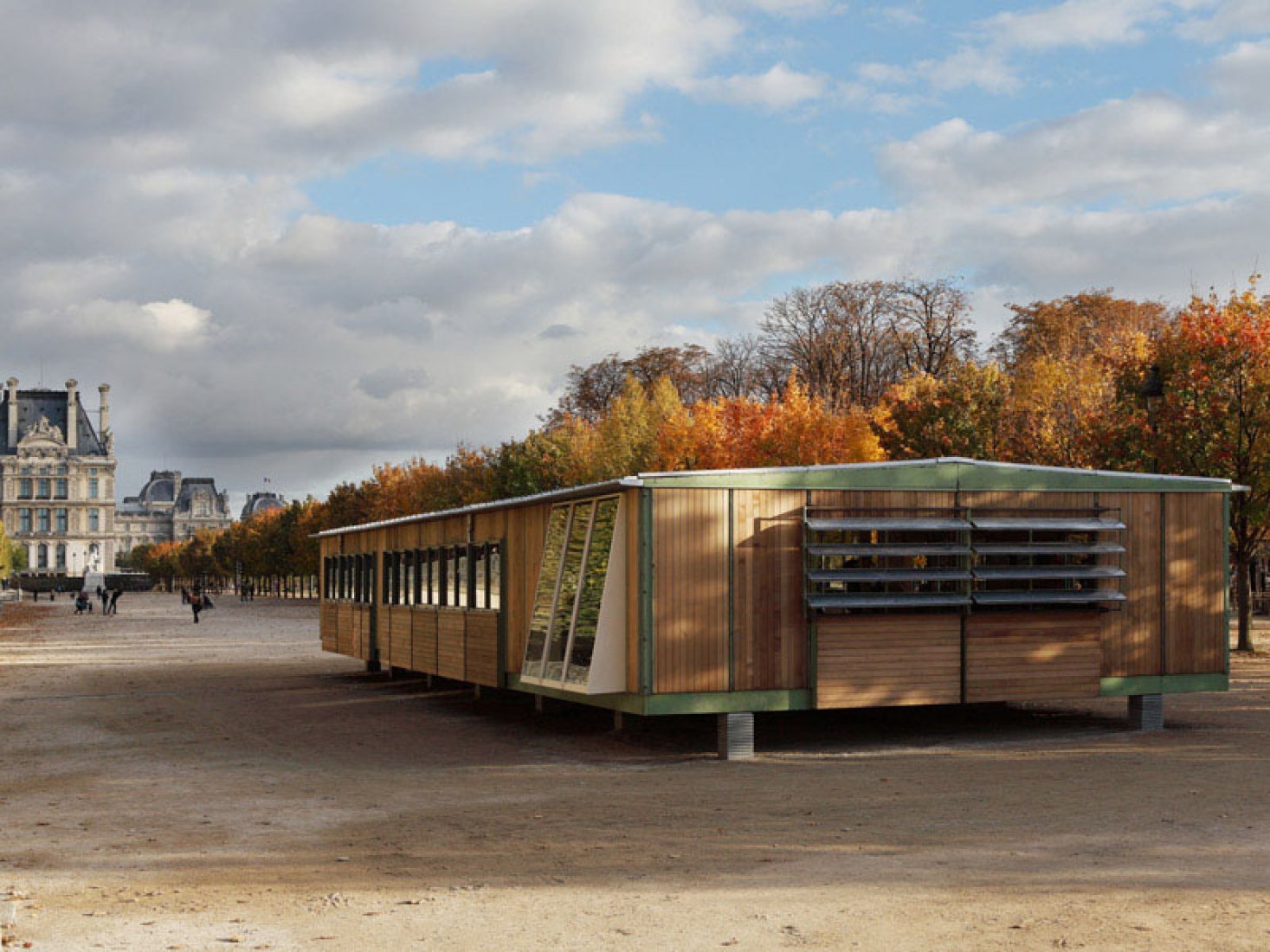 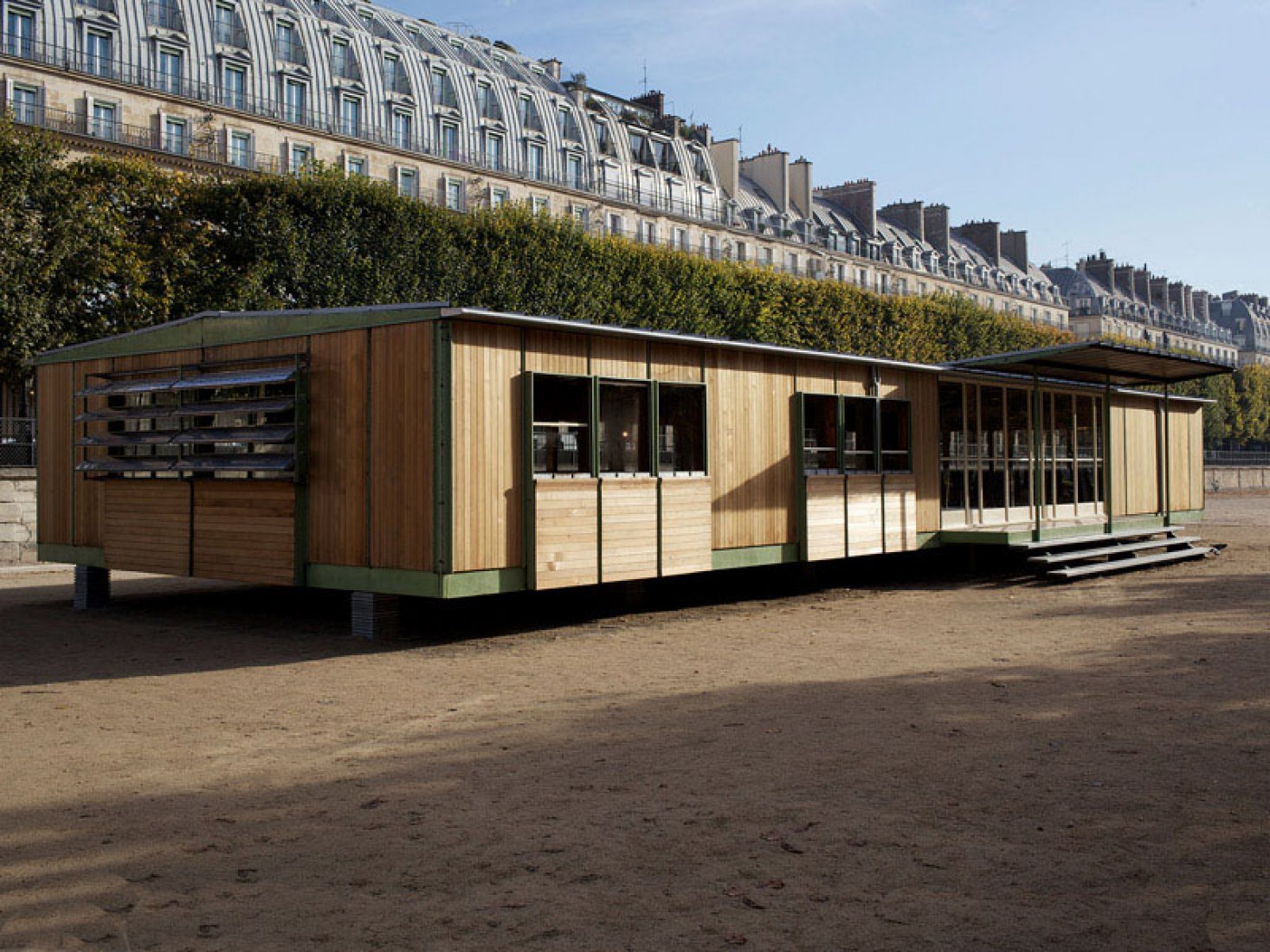 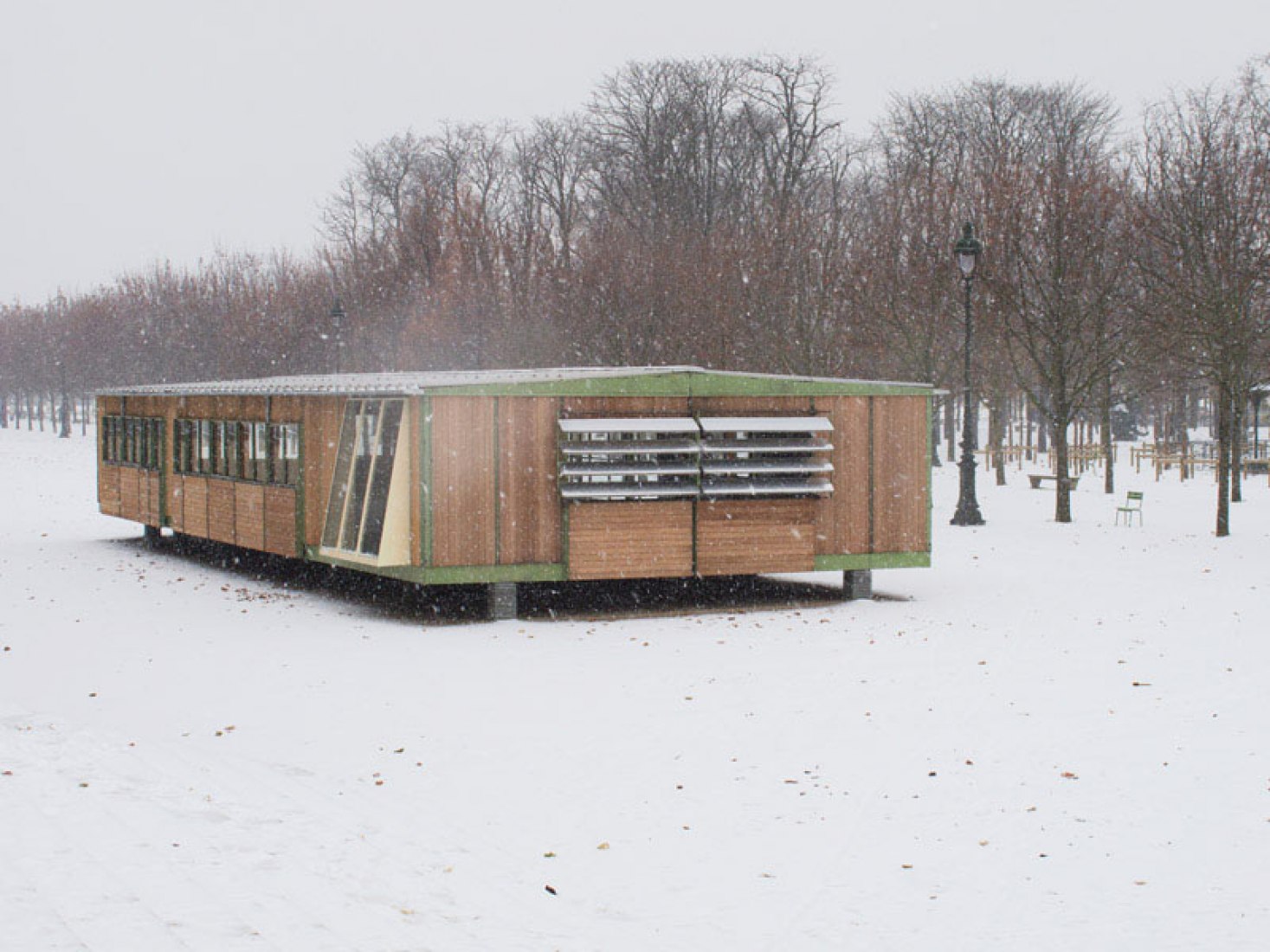 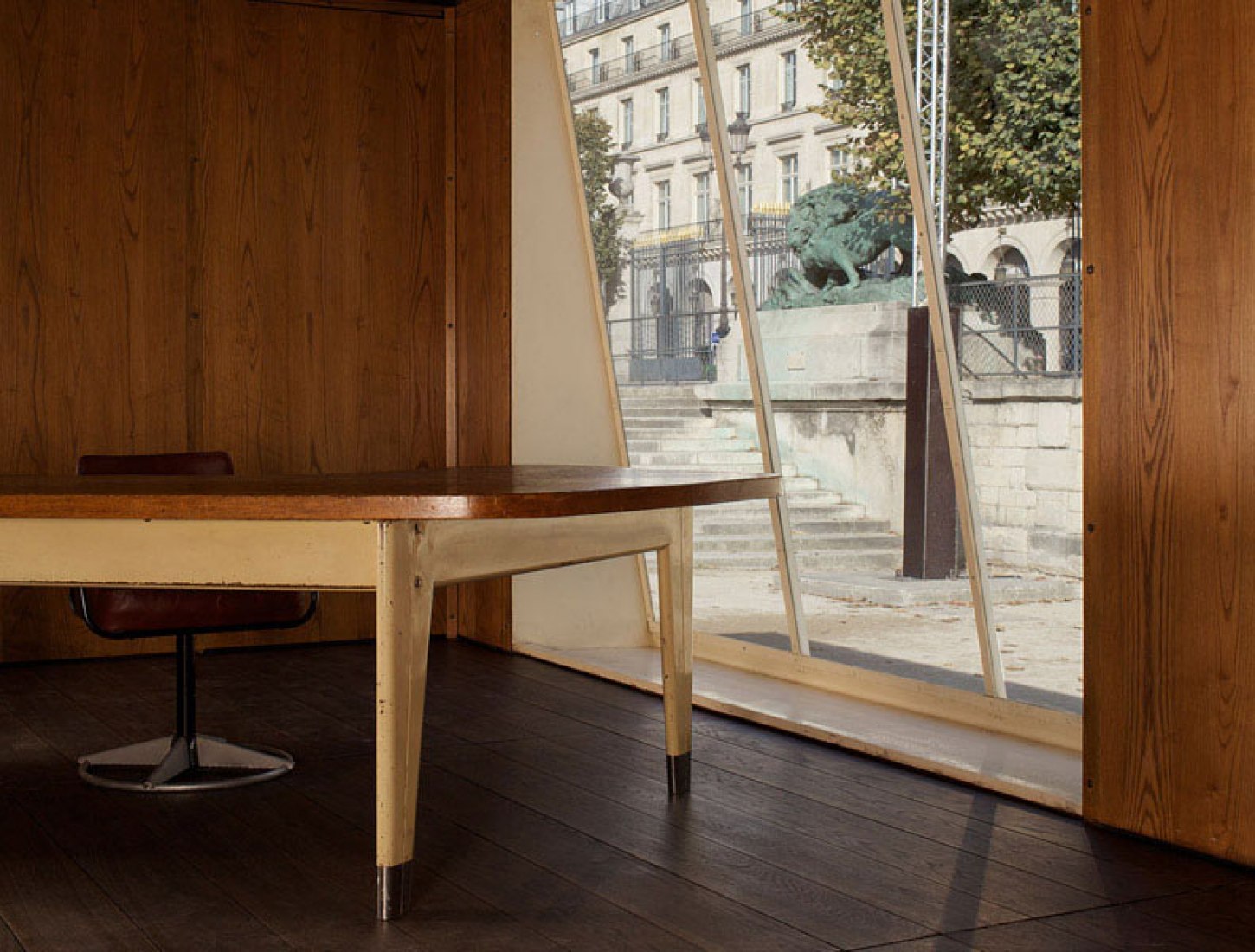 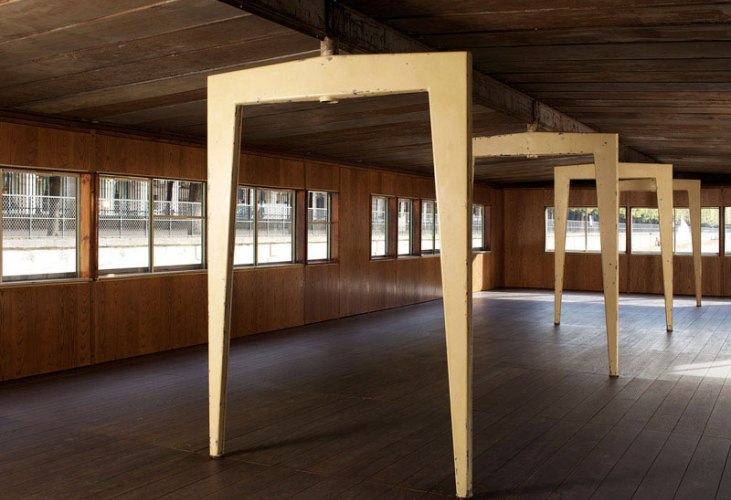 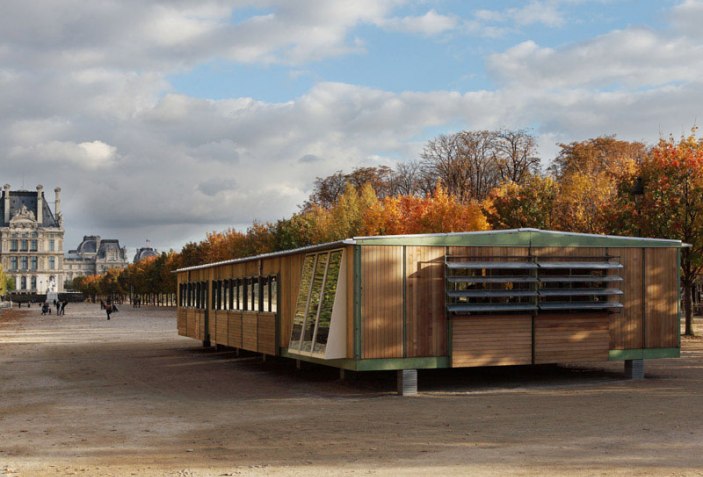 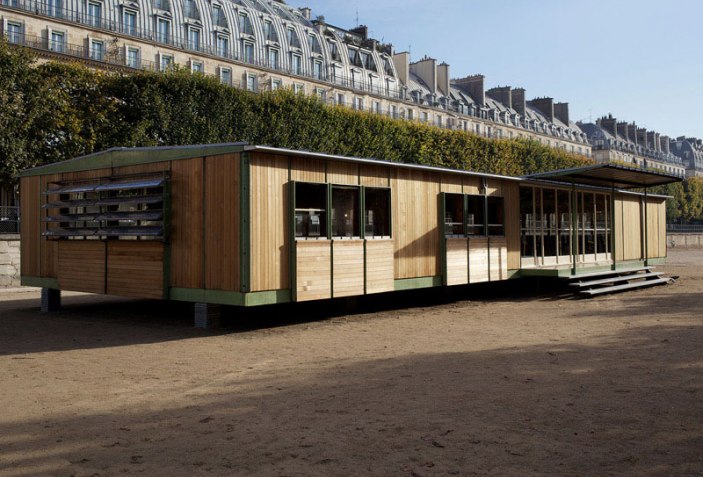 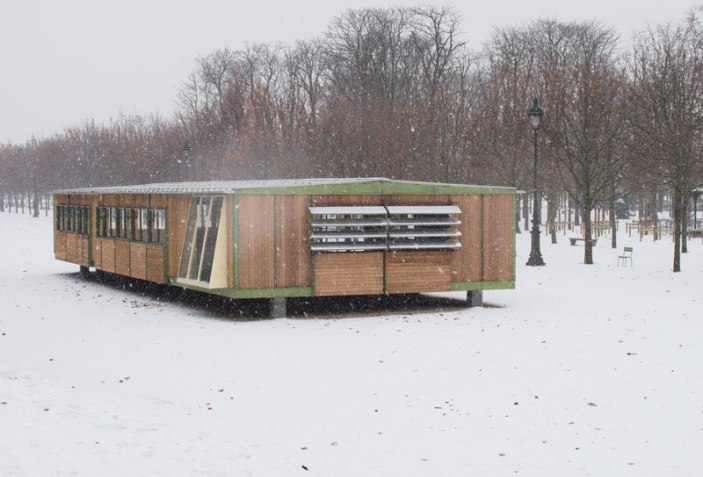 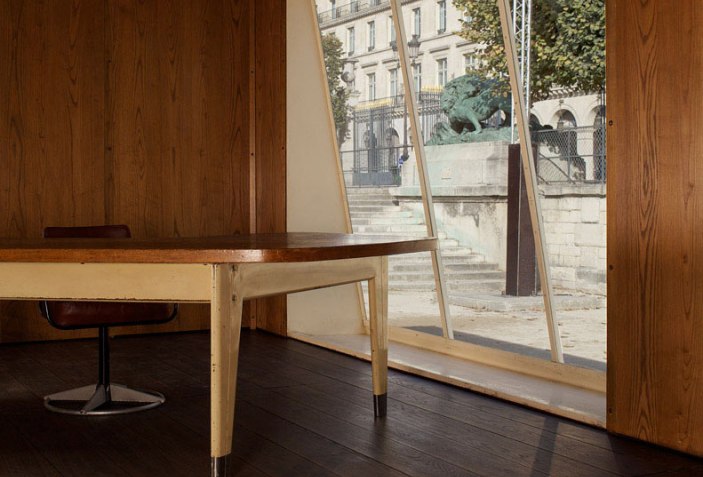 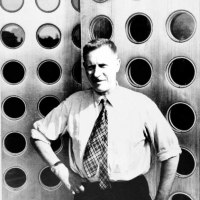 Jean Prouvé (Paris, 1901 - Nancy, 1984) As a student of the metalworker Emile Robert from 1916 to 1919 and a collaborator with architects such as Robert Mallet-Stevens, Le Corbusier, Albert Laprade and Tony Garnier, Jean Prouvé proved to be a far-sighted technician who constantly adapted himself to the problems of his times through working in a collective structure. It was in this spirit that he opened his first workshop in 1923 (rue du Général Custine, Nancy) before moving to the rue des Jardiniers seven years later.

In 1945, Prouvé built his factory in Maxeville, where he stayed until 1954, at which time he lost control of his business. Thereafter, he continued his activities as a consulting-engineer for large architectural projects.

Beginning with the construction of wrought-iron gateways, railings and windows, from 1924 onwards Jean Prouvé created his first items of furniture. Having discovered electric welding and the application of diverse techniques of construction, he resorted to sheet-steel (particularly used in the automobile industry) of an extreme thinness - less than 1 mm thick - permitting him to obtain a “hollow-body” which allowed for a structure of exceptional resistance: the reclining chair of 1929 is a typical example.

The use of this metal is found in most of the furniture that marked his development. Jean Prouvé frequently employed aluminium in the form of corrugated sheet metal and molded elements - such as the adaptation of the rear legs of his office chair of 1934.

With his contribution to the 1930 exhibition at the Union des Artistes Modernes, of which he was a member since its formation in 1929, Jean Prouvé immediately confirmed the singularity of his approach: creating -with rustproof elements- furniture produced in series by industrial machines.

Jean Prouvé’s first significant collaboration with an architect was through Robert Mallet-Stevens, with whom he worked on the design of lift cabins, balustrades and staircase banisters. Prouvé decided on a modern aesthetic for these objects, so it is not surprising that he became associated with the Union of Modern Artists (UAM) from its foundation in 1929. There would be no turning back from this commitment to modernity, as demonstrated by his participation in the UAM pavilion at the International Exhibition of Arts and Techniques Applied to Modern Life, held in Paris in 1937. He designed a spectacular staircase with a central support and, especially for the occasion, created pieces of furniture alongside Jacques André, as well as a bathroom unit for a project in collaboration with Le Corbusier, Pierre Jeanneret and Charlotte Perriand.

In 1931, Prouvé steered his company, Ateliers Jean Prouvé, towards mass production, and in the mi-1930s his work on buildings went beyond the design and construction of elements, expanding to take in the entire structure. “In 1934-1935 I imagined another way of doing architecture; in other words, another way of using materials […]. I imagined buildings with a structure, in the same way as a human has a skeleton, to which the complement had to be added; and the logical complement for a skeleton — whether it was made of steel, concrete or wood — consisted in wrapping it in a facade, but a light one, given that the structure holds itself up alone.”

His first project with structures made entirely of metal and glass was the Roland Garros Aero-Club (Buc, 1935-1936). In the Maison du peuple and covered market (Clichy, 1936-1938), which is still in operation, he created façades with metal cladding whose panels were made tense by a slight bulging brought about by a spring located in the panel centre. On the first floor of the market, Prouvé designed a multi-purpose hall with moveable elements: the roof opens, the partition walls fold up, the seats can be retracted and the floors can be moved.

During the Second World War, Prouvé associated with Le Corbusier and Pierre Jeanneret in the construction of demountable pavilions for workers of the Société Centrale des Alliages Légers [Central Company of Light Alloys], in Issoire, France. A considerable number of pavilions were built — dormitories, canteen, infirmary, saloon and office for the designers — using a system that combined centralised porticoes and modular elements for roofs and façades. Prouvé was active with the French Resistance during the war, and was named mayor of Nancy in 1944.

Jean Prouvé’s ambition was to create products for the greatest number of people possible. He believed in the idea of progress for the benefit of all. So while never losing his avant-garde character, that is what drove him to design and build quality dwellings and furniture conceived as community facilities, in particular during the post-war years when housing was in short supply. “We need prefabricated houses”, he said, and from 1946 was able to enjoy an essential instrument to attain that objective: the Maxéville factory. Installed on a large site and adapted to mass production, prefabricated parts were produced in the factory workshop and assembled on-site. This was the method used to build Maison Tropicale (1949), Maison Métropole (1950) and Maison Coque (1951) which, as a novelty, was assembled on the basis of curved roof panels with their corresponding metallic supports. Furthermore, Prouvé always designed the houses with their corresponding furniture.

He filled numerous orders such as the University of Nancy in 1932 and the furniture for the cafeteria des Arts et Métiers, Cité Internationale Universitaire Paris in 1950.

Jean Prouvé built two unique buildings in the 1950s: his family house in Nancy (1954), constructed on rugged, difficult terrain, with prefabricated elements which were light and cheap; and the Aluminium Pavilion for the Centenary of Aluminium (1954). Installed on the Quai d’Orsay, the pavilion was totally demountable and is considered by some to be his masterpiece.

Another of Prouvé’s most significant works is the Maison des Jours Meilleurs [A house for better days] (1956), which was his response to the call from the clergyman Abbé Pierre in the winter of 1954: How can we accommodate the homeless, who are dying of cold? Prouvé had the idea of a house which was equivalent to a standard two-bedroom (50 m2) apartment, industrially mass-produced and assembled on-site. Unfortunately, the house failed to obtain the corresponding technical approval thus preventing its industrial production, and only five were made. During the same period he designed houses for oil industry workers in the desert (Maison du Sahara, 1958) and took part in construction of the Freie Universität in Berlín (1963-1971). He also won the first round of a competition to build a thousand youth clubs in France, organised by the French Ministry of Youth and Sport. The prototype could be assembled in 45 minutes; two identical curved panels were raised and joined together at the ridge, thus forming a barrel vault 10 metres in diameter. However, the jury finally rejected this solution.

The great contribution of Prouvé as regards furniture was the creation of durable pieces with economy of materials, often folding and reclinable. In technical terms, the folded metal sheet provided the object’s resistance, and the stress is uniformly dispersed through the chair’s legs. One of his most successful models was the 1934 Standard chair. He developed and perfected it over time, and in 15 years it underwent various adaptations: he combined wood and metal, it was demountable and finally became an absolute reference under the name of the Cafeteria chair. Some of his most famous pieces of furniture can be seen in the exhibition: the Dactylo chair number 304 (1950), the Centrale table (1951), the Nursery School chair and two-seater desk (1951), the Compass table (1953) and the Antony lounge chair (1955).

Aside from educational furniture, Jean Prouvé furnished offices and created chairs, tables, shelves, bookshelves and cabinets, all following the same construction principles: based on a sketch, a prototype was realized in order for its details to be assessed through a very strict evaluation process. This rigour allowed him to work with renowned architects Charlotte Perriand and Pierre Jeanneret. Prouvé was affected by a pronounced appreciation for wood - natural wood or laminate -, with which he replaced his metallic structures in periods of shortage (wood chair of 1942). From 1956 onwards, his furniture was distributed by the gallery Steph Simon.

The final project of his career is usually referred to as Les Blancs-Manteaux, the name of the street where, in 1968, Prouvé would install his last workshop, very close, precisely, to where the Centre Pompidou would be built. There, he continued designing elements for construction with a small team of engineers. He designed service stations and petrol stations for Total, many of them with an original circular shape, which were installed on motorways throughout France. He also designed the curtain walls for the façades of the French Communist Party headquarters (Paris, 1969-1971), a project led by the architect Oscar Niemeyer. Prouvé’s last work was a radar tower in Quessant (1978-1980), a purely technical construction with no architectural pretensions.

Jean Prouvé contributed considerably to the reconstruction and urbanization of France after the war. Always being a true entrepreneur, he was able to break away from traditional means of construction while giving priority to experience over profit. 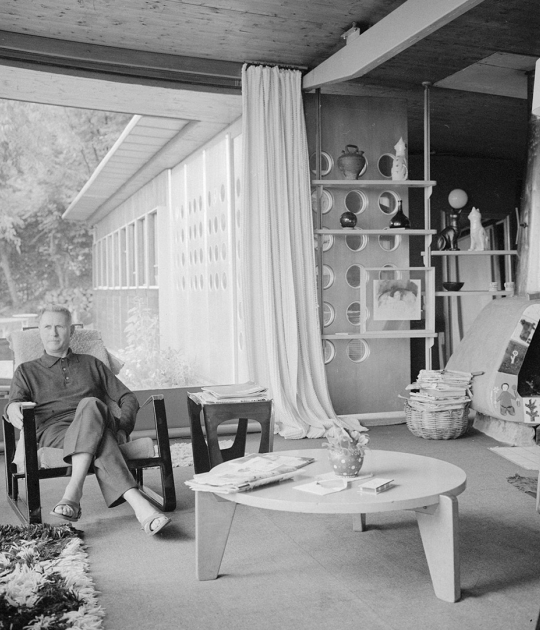 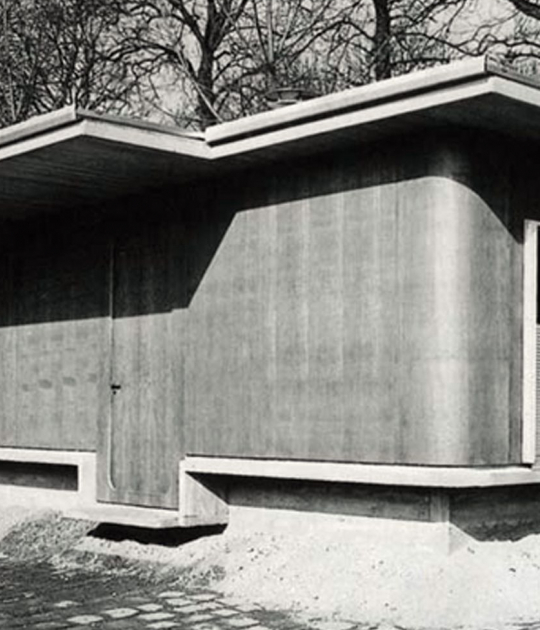 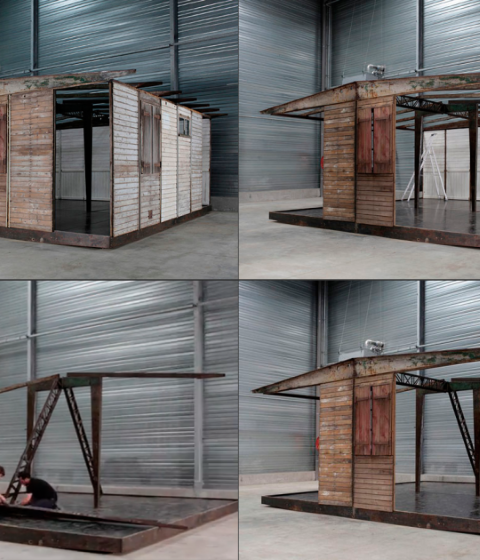 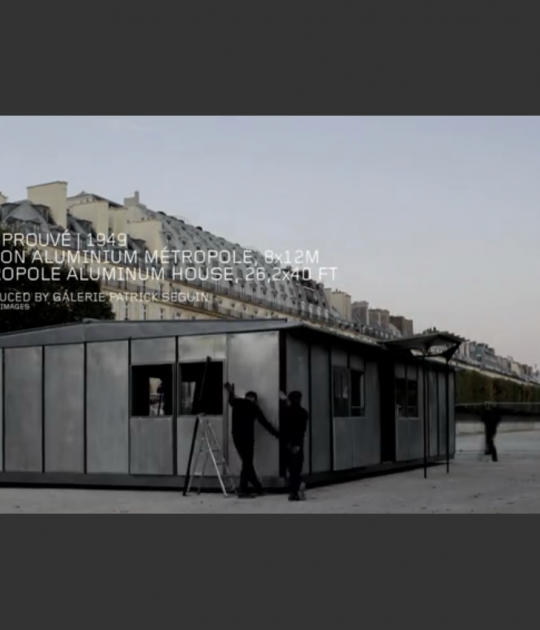 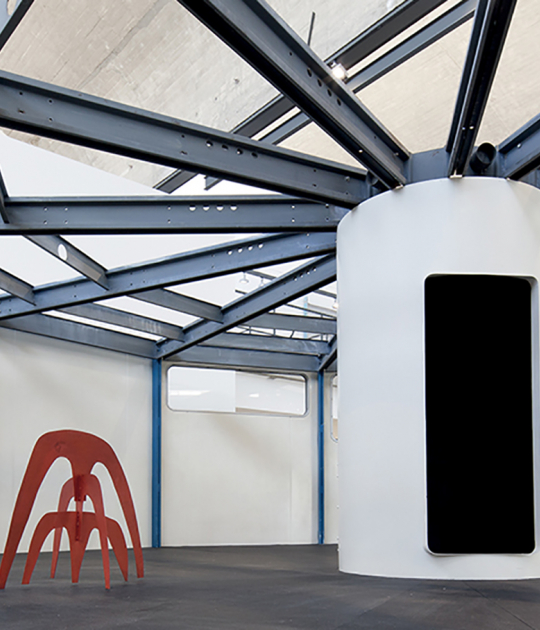