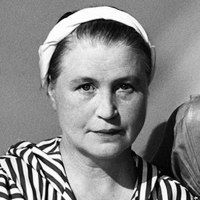 Aino Aalto. (Helsinki, 1894 - 1949) Aino Mandelin-Marsio was one of the first female Finnish architects. She played a key role both in the modern architecture of her country and in the work of her husband, Alvar Aalto, with whom she worked until her death in 1949. In their creations they combine the racionalist thinking with Scandinavian vernacular architecture and the use of natural materials.

Her work highlights her interest in small scale, in the most intimate and day-to-day dimension of design, hence her most relevant contributions belong to the field of interior design and furniture. This is the case of the design of the famous Villa Mairea in Noormarkku (1937-1939) or the "minimal kitchen" of 1930, as well as part of the furniture for the Sanatorio de Paimio (1927-1929) or the minimum housing for workers from various factories of the company Älhstrom.

She graduated as an architect at the Helsinki Institute of Technology in 1920. During her studies, she worked as an apprentice in carpentry and masonry, experiences of great influence in her later work. She began her professional career with the architect Oiva Kallio. In 1924 she began working for the office of Alvar Aalto, with whom she married after about six months.

It is difficult to discern the contributions of Aino in the projects attributed to Alvar Aalto. However, according to Giedion, many of their projects are signed by both, and there are also works signed separately, such as contests of interior design, furniture and utilitarian objects.

According to Erling Bjertnae, assistant to the office of Alvar Aalto, Pöytyä Parish was a complete work of Aino. Among her small-scale projects, the creation in 1926 of their own summer house, Villa Flora in Alajärvi, stands out. Two years later, Alvar Aalto won the first prize in the prototype design contest for weekend house with an adaptation of this villa, in the "Konsoli" project.

In 1930 the couple presented a newfangled apartment for the Minimum Apartment Exhibition in Helsinki, with a design in line with the emancipation of women in society. Aino introduced here the first modern built-in kitchen, the famous "minimal kitchen", influenced by the Frankfurter Küchen designed by Margarete Schüte-Lihoztky in 1926.

In 1935 she created the company Artek (art + technique) with her husband and the married couple of Marie Gullichsen and Nils-Gustav Hahl, with the aim of creating objects for the "domestic industry". She will be its creative director until 1941, when she will become general director.

In 1936, the architect obtained the Gold Medal in Design at the VI Milan Triennale, with the Bölgeblick (wave view) series of glass pieces designed in 1932 for a contest organized by the Finnish factory of Karhula and Iittala. The collection, whose conception is highly linked to mass production methods, became very popular, and it is still being manufactured today. Se also collaborated with Alvar in the conception of the famous Savoy Vase in 1936.

In 1938, the couple presented separately to the contest of the Finland Pavilion for the New York World's Fair. Aino won the third prize, while Alvar won the first two. Finally, the pavilion was built with ideas of the three proposals.