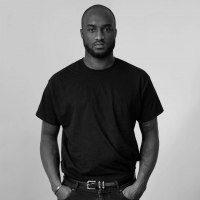 Virgil Abloh. (b. September 30, 1980 / November 28, 2021) The Illinois-born designer, 38, has been creating fashion, objects, furniture, graphic works, painting, sculpture and photography for the last 20 years. He is the artistic director of Louis Vuitton's men's wear collection since March 2018. Apart from his work at Louis Vuitton, Abloh serves as the chief executive officer of the Milan-based label Off-White, a fashion house he founded in 2013. He has designed pieces for other renowned brands such as Pioneer, IKEA and Nike.

Abloh became a household name after working on creative direction for Kanye West’s DONDA firm, where he collaborated with the musician on album covers, concert designs and merchandising. Abloh’s attraction to music has led him to professionally DJ at prestigious venues and festivals around the world, such as Lollapalooza and Coachella.

Time magazine named him one of the 100 most influential people in the world in 2018. Abloh was featured in conversation with his friend and frequent collaborator Takashi Murakami on the cover of the fall 2018 issue of Cultured magazine.

Virgil Abloh passed away at the age of 41 after a two-year battle with cancer.