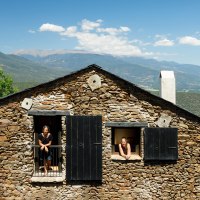 ACABADOMATE is an architecture and interior design studio based in Barcelona, formed by Alessandra Faraone and Valeria Merola, two Italian architects who, at the end of their studies in Naples, established their personal and professional lives in Catalonia.

Its main objective is to improve the quality of people's living spaces, promoting dialogue between existing/new, natural/artificial in respect, care, and collaboration with the end-user. The starting point in each project, regardless of its scale, is the search for the “genetic code” of the environment, both built and natural and human. They perfected their training with the Postgraduate course in "Architectural Rehabilitation and Restoration. From the structural constructive analysis to the intervention project in the context of the CTE" at the UPC in Barcelona.

They opted for re-use rather than demolition and reconstruction. Their interventions try to generate spaces that are both functional and emotional, without imposing themselves as icons but presenting themselves as subtle, almost silent operations in the dialogue with the identity of the place and with the expectations that its users project on it.

Alessandra Faraone was born in Naples in 1977. Graduated in 2000 from Naples Faculty of Architecture of the Universitá Federico II. She completed the postgraduate course in "Architectural Rehabilitation and Restoration. From 2001 to 2004 he collaborated with MBM Arquitectes. In 2006 she associated with Federico Calabrese and Marc Tomás forming fondaRIUS architecture. In 2011 she began an intense collaboration with Valeria Merola, with which she associates in late 2012 to found ACABADOMATE.

Valeria Merola was born in Rome in 1979. Graduated in 2004 from the Faculty of Architecture of Naples of the Universitá Federico II. She completed the postgraduate course in "Architectural Rehabilitation and Restoration. She has collaborated with the _Scape studios in Rome and Paris; B720 and Rba arquitectes in Barcelona. In 2010 she began his activity independently between Catalonia and Italy and in 2012 she founded with Alessandra Faraone ACABADOMATE.