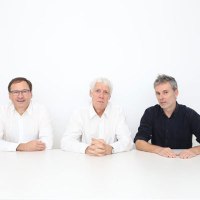 Henri Bava. Born in Tunisia and raised between Tunisia and Paris, Henri Bava started his studies with a degree in plant biology from Paris-Orsay University. Showing a keen interest in the living world but from different perspectives, he enrolled afterwards in the École Nationale Supérieure du Paysage (ENSP) in Versailles in 1980, following at the same time a stage design course at the Jacques Lecoq École Internationale de Théâtre in Paris. He graduated as DPLG landscape designer in 1984 with Michel Corajoud as supervisor, and worked for one year in his agency in Paris. In 1986, with his current associates, he founded Agence Ter. Just three years after obtaining his degree, he returned to the ENSP Versailles as a teacher, in parallel to his professional activities, for a period of ten years. As of 1989, after the departure of Michel Hössler for French Guyana, he headed the Agence Ter office in Paris together with Olivier Philippe. From 1993 to 1997, he combined this with work as a State Consultant Landscape Designer for the DDE of the Eure County. Henri Bava was elected president of the French Landscape Federation, a position held between 1996 and 1998.

It was at this time that he initiated his work in Germany. He lead the execution of the Aqua Magica Park project near Hanover and was appointed at the same time, under a European recruitment process, as full professor and director of the Landscape department of the school of architecture at the Karlsruhe Institute of Technology (KIT), where he is still teaching today. In 2000, he created an Agence Ter office in Karlsruhe, from where he directed large cross-border territory development projects, rehabilitation projects for derelict industrial sites or the realisation of major public venues, such as in Duisburg. Six years later he was elected a member of the Berlin Academy of Arts. After returning to Agence Ter Paris in 2007, he was elected president of the governing board of the École Nationale de la Nature et du Paysage, Blois (ENSNP) in 2010. That same year, Henri Bava was invited to the Harvard University Graduate School of Design by Charles Waldheim, director of the landscape department, where he often teaches in the frame of design studios until today.

Michel Hössler. Born and raised in the Paris metropolitan area, Michel Hössler obtained both the degrees of landscape architect (DPLG) and urban planner (DIUP). He studied botany at the University Pierre et Marie Curie in Paris, followed by landscape architecture at the École Nationale Supérieure du Paysage (ENSP) in Versailles and urban planning at the Institut d’Urbanisme in Paris XII. In 1986 he founded the office of Agence Ter in Paris with his fellow student Henri Bava and Olivier Philippe, a colleague in the landscape architecture office of Alexandre Chemetoff.

From 1989 onwards Michel Hössler was director of the branch office in Kourou, French Guyana, conceiving and realizing large-scale projects in Guyana as well as the West Indies. Since 2005, Michel Hössler has been again based in the Paris office, responsible for major urban projects throughout France and around the world, retaining his interest in projects in the tropics and developing a series of projects in China, including the French Pavilion at the 2010 Shanghai International Exposition, with Jacques Ferrier Architects, and in 2016, the landscape design for the right banks of Shanghai’s Huangpu river.

From 2005, he has taught at the ENSP in Versailles, and since several years he has the position of master assistant at the ENSA Paris – La Villette. With his two associates he has led workshops in Urban and Landscape Design at the Harvard University Graduate School of Design as well as landscape design studios at the ETSAB in Barcelona.

Olivier Philippe.  After being raised both in Paris and India, Olivier Philippe studied at the Special School of Architecture and Landscape of Paris, after which he joined the École Nationale Supérieure des Beaux-Arts in Paris. He later graduated as a landscape architect from the National School of Landscape of Versailles. His professional career started with the crucial encounter with Alexandre Chemetoff, with whom he collaborated for five years. Afterwards, he became a consultant at the Parc de la Villette Public Establishment, involved in developing the park of Bernard Tschumi. During this period, he met Henri Bava and Michel Hössler, with whom he decided to create Agence Ter in 1986. One year later, and this for a period of seventeen years, he started teaching at the École Nationale Supérieure du Paysage, Versailles, in the framework of a project workshop, addressing all scales of the urban and territorial project, always with the landscape as driver for development.

From 1995 to 1998, he was State Consultant Landscape Designer for the Aisne County. From 1999 to 2006, as the only associate based in Paris, he was leading vast urban projects such as Euralille 2 (the Inhabited Wood), Portes d’Arcueil (La Vache Noire) or the North Bahrain New Town, whilst managing at the same time major public space and park projects (Cormailles Park in Ivry and, more recently, the Royal Canal Linear Park in Dublin and the Parc de Billancourt in Boulogne-Billancourt).

In 2008, Olivier Philippe chaired the NAJAP jury (new albums of young architects and landscape designers) and became member of the French Europan governing board.  The projects he currently leads include the Metropolitan Park of Saint-Ouen, the Square of “Les Glories Catalanes” in Barcelona, the renovation of the Royal Air Force Museum in Hendon, London and the urban and landscape design for the Condorcet Campus in Aubervilliers, Paris. In 2011, he taught at the Harvard University Graduate School of Design along with his two associates in the frame of a landscape and urban design studio. Olivier Philippe has also been guest professor at other institutions, as for example landscape design studio teacher at the ETSAB in Barcelona in 2016.