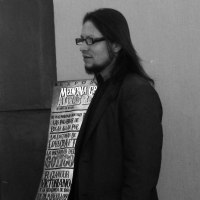 Oskar Alvarado, born in Guadalajara, México; He is an illustrator, animator and composer. His early years in professional work includes the comics series Penumbra and the animated short-films Sonámbulo and Murnau the Vampire

The subject of vampires has always been one of his obsessions since he was a child but it was until 1998 when he started the comics series through which became a cult figure: Penumbra. The story draws on his personal mythology and classical versions of the vampire myth. Though highly experimental and underground in nature and distribution the series gradually became a success in his native Guadalajara. The first print was self-published by his own publishing house, Imaginaria Comics. In 2008, Oskar Alvarado published a commemorative graphic novel under the same title as a celebration for the first ten years of the project.

While working on Penumbra he decided to embark on the production of an independent animation project named Sonámbulo. This silent short was based on Robert Wiene's expressionist film Das Cabinet des Dr. Caligari. The project was again self-financed and supported by him and his own students. The soundtrack was made by the group Sutra. A local talented band from the city scene.

Oskar Alvarado has been busy in the last years making short-films and fleshing-out old and new ideas. In 2004 and 2007, He was invited to attend the Blender Conference in Amsterdam where he presented the project Roboto, a series of ten shorts about robots. One of the most ambitious project was Murnau the Vampire, the first Mexican animation film realized on DVD format. It was presented at the 2007 Blender Conference and the band Theatre des Vampires collaborated in the soundtrack.

Today, he works as freelance artist for many studios and producers in many countries. From artwork for games, comics and video clips. Recent Projects made and on going with the independent record label “YUKU” from Prague, and his participation as main artist in Collectorvision Studios in Canada, makes on him a new and fresh vision of my own abilities and makes him find the most important to me, creativity freedom and amazing friendships.

Since 1999 he has been teaching illustration and animation at the Instituto Cultural Cabañas and the Fondo de Cultura Económica in Guadalajara. Also speaker  in comic and games themed conferences and comicons.