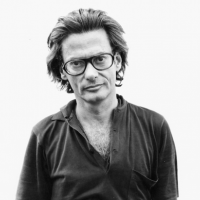 Richard Avedon (1923–2004) was born and lived in New York City. His interest in photography began at a young age and he joined the Young Men's Hebrew Association (YMHA) photography club when he was twelve years old. He attended DeWitt Clinton High School in the Bronx, where he co-edited the school's literary magazine, The Magpie, with James Baldwin. He was named Poet Laureate of the New York City High Schools in 1941.

Avedon joined the armed forces in 1942 during World War II, serving as a photo mate second class in the US Merchant Marine. As he described it, “My job was to take ID photos. I must have taken pictures of a hundred thousand faces before it occurred to me that I was becoming a photographer."

After two years of service, he left the Merchant Navy to work as a professional photographer, initially creating fashion images and studying with art director Alexey Brodovitch at the New School for Social Research's Design Laboratory. At age 22, Avedon began working as a freelance photographer, primarily for Harper's Bazaar. Initially he photographed models and fashion on the streets, in nightclubs, at the circus, on the beach and in other unusual places, employing a creativity that soon became a hallmark of his art. Under Brodovitch's tutelage, he quickly became the lead photographer for Harper's Bazaar.

From the beginning of his career, Avedon made formal portraits for publication in Theater Arts, Life, Look, and Harper's Bazaar magazines, among many others. He was fascinated by photography's ability to suggest personality and evoke the lives of its subjects. He recorded poses, attitudes, hairstyles, clothing and accessories as vital and revealing elements of an image.

Avedon's first museum retrospective was held at the Smithsonian Institution in 1962. Many major museum exhibitions followed, including two at the Metropolitan Museum of Art in New York (1978 and 2002), the Minneapolis Institute of Arts ( 1970), the Amon Carter Museum of American Art (1985), and the Whitney Museum of American Art (1994). His first book of photographs, Observations, with an essay by Truman Capote, was published in 1959. He continued to publish books of his works throughout his life, including Nothing Personal in 1964 (with an essay by James Baldwin), Portraits 1947– 1977 (1978, with an essay by Harold Rosenberg), An Autobiography (1993), Evidence 1944–1994 (1994, with essays by Jane Livingston and Adam Gopnik), and The Sixties (1999, with interviews by Doon Arbus). In addition, he established the Richard Avedon Foundation.

Avedon died of a brain hemorrhage while working for The New Yorker, in San Antonio, Texas, on October 1, 2004.