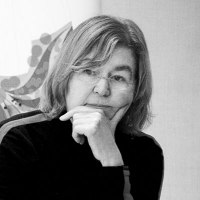 Diana Balmori (1932-2016) She was born in 1932 in Gijón, Spain and emigrated to Argentina as a child, where she graduated from the University of Tucumán in 1952.  She received a Ph.D. in Urban History from the University of Califorinia at Los Angeles in 1973 and graduated from the Radcliffe College Landscape Program in 1989. After working with her husband César Pelli for many years she founded her own firm, Balmori Associates in 1990.

Her urban design practice designs sustainable infrastructures that serve as an interface between landscape and architecture. In 2006, she created BAL/LABs within Balmori Associates, to further push the boundaries of architecture, art and engineering: Green Roofs, Floating Islands, Temporary Landscapes, Forms of Representation, and Zero Waste City, among others.

Diana had an active voice in national policy and decision-making on topics that relate to landscape design, architecture and urban planning. She served as: member of The United States Commission of Fine Arts in Washington, DC; a Senior Fellow of Dumbarton Oaks, Washington, DC; a member of the Allston Development Group at Harvard University, Boston, MA; on the Board of The Van Alen Institute, New York City; The Lower Manhattan Development Corporation for the World Trade Center Site, New York City; and as a Committee Member for the Comprehensive Design Plan for the White House.