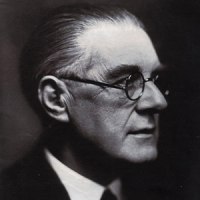 Peter Behrens was born on the 14th April 1868 in Hamburg, Germany, within a wealthy family. With 14 years he became orphan, being Karl Sieveking, a member of the prominent families of the city senator, who asumed his tutelage and his only brother's.

Between 1886 and 1889 he studied painting at the School of Art in Karlsruhe, studies that were completed later in Düsseldorf in the year 1889. A year later he gets set in Munich, after a trip through Netherlands, where he worked as a painter, commercial artist , photographer and designer.

Two years later he abandoned the painting fiesld to design jewelry, furniture, glassware and porcelain. His work will be exhibited at the Keller and Reiner Gallery of Berlin, the Gaspolat Kunsteverein Munich and Darmstadt. In 1900 he was invited by the Duke Ernst Ludwig of Hesse to join the newly formed Colony of Artists of Darmstadt, where he will be teaching until 1903. It was actually in this place where he made his first architectural work: his home in Colonia,  whose interiors were destroyed in 1944 during a fire, being restored by its owner, Auguste zu Höne.

In 1903 he moved to Düsseldorf, where he became director of the Kunstgewerbeschule (School of Arts and Crafts). Five years later he became part of the Deutscher Werkbund due to the similarity of ideas he shared with its members. That same year he was named artistic adviser of AEG (Allgemeine Elektrizitäts- Gesellschaft), moving to Berlin.

It was precisely for AEG to whom he made the most recognized of his work, also helping to strengthen the idea of corporate identity. Behrens proclaimed the union of art and industry, in line with the ideals of Hermann Muthesius when founding the Deutscher Werkbund. In the years immediately following, his office will receive Walter Gropius, Adolf Meyer, Ludwig Mies Van der Rohe and Le Corbusier, being a recognized influence, as show by Gropius himself in his book 'The new architecture and the Bauhaus'. In 1914 he joined the Manifesto of university professors and German scientists, and took part in 1927 in the exhibition organized by the Werkbund in Welbenhof. Between 1922 and 1936 he served as a professor at the School of Architecture of Vienna. In addition, in 1936 he became the director of the Department of Architecture of the Prussian Academy of Arts in Berlin.

He will die on February 27, 1940 of a heart attack at the Hotel Bristol in Berlin, where he was staying after scaping from the cold of his countryside house.