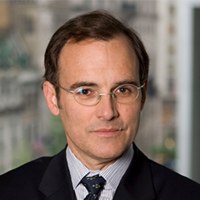 Barry Bergdoll is a Meyer Schapiro Professor of Art History and Archaeology at Columbia University and former curator of the Department of Architecture and Design at The Museum of Modern Art, New York. His proficient knowledge of buildings informs his critical analysis of contemporary architecture.

Bergdoll is a member of the American Academy of Arts and Sciences, a fellow of the Royal Institute of British Architects and the Society of Architectural Historians (US), and an honorary fellow of the American Institute of Architects, New York; and has received a medal from the Sir John Soane Foundation, New York. He is on the Board of Directors of the Frank Lloyd Wright Building Conservancy, Board President of the Center for Architecture, New York, and has served on the Advisory Committee of the Mission sur l’Île de la Cité, Paris, the Prize Selection Committee of Fondation Le Corbusier, Paris; and the US Committee and Jury of the Premium Imperiale, Tokyo. He received a Ph.D. in Art History from Columbia University and an M.A. from the University of Cambridge.