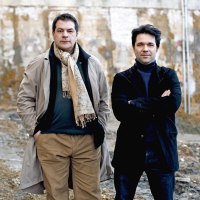 In 1997, Vasa J. Perović and Matija Bevk founded Bevk Perović arhitekti in Ljubljana, Slovenia. They work, alongside with the international team of 15 young architects, on a diverse range of projects, in different European countries.

Since its beginnings the studio received wide international recognition. They have been awarded numerous national and international prizes (European Union Prize for Contemporary Architecture – Mies van der Rohe Emerging Architect Award in 2007, Kunstpreis Berlin in 2006, Piranesi Award in 2005, 5 Plečnik Prizes for best building of the year in Slovenia, 4 Golden Pencil awards by the Chamber of Architects, Prešeren Prize, the highest national prize for culture, awarded by the President of the Republic of Slovenia in 2005,etc)

They exhibit their work extensively, and recent solo exhibitions of their work have been organized in Kunstverein Bielefeld, Germany; Fragner Gallery, Prague, Czech Republic, and Sa Cova, Girona, Spain.

The work of Bevk Perović arhitekti is characterized by continuous research into programmes and possibilities of their reinterpretations in contemporary architectural practice.

In order to understand and comprehend their work, one must examine their ‘dedicated choice’ to follow conditions in which a building emerges. These conditions range from political and social, to environmental and material - their simple, yet complex architectural solutions strive to answer those conditions beyond bare function.