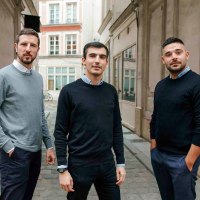 Bien Urbain. Initiated in 2013 during the Europan 12 competition it won at the Rouen St-Sever site, the team formed a company in January 2016 around Nicolas Cèbe and Jérôme Stablon; It was reinforced in 2019 with the arrival of Guillaume Cantardjian.

Bien Urbain is responsible for the design and monitoring of the work, right up to the reception, of new projects as well as renovation. They support project owners on programs of public facilities, shops, activities and housing as well as on town planning missions. The agency can also intervene upstream, in the context of Assistance to the Contracting Authority, when it comes to enhancing a heritage, consolidating a program or the feasibility of a project.

Bien Urbain relies on a network of partners with complementary skills, gathered in multidisciplinary teams and adapted to the specific challenges of each project and mission which are itself entrusted.

The agency is based in Paris and strives to develop passionate, exciting practices in ever more varied fields.

Nicolas Cèbe. Born in 1981, Nicolas graduated as a DPLG from ENSAV & T de Marne-la-Vallée in 2005 and worked for ten years as a project manager at Associated Lion Workshops. Responsible for planning, managing and developing large projects, he intervenes in all operational phases, from assistance to reception operations.

Jérôme Stablon. Born in 1987, Jérôme is a graduate of ENSA Toulouse, of the DSA of urban architect in Marne-la-Vallée, and held the position of project manager for five years with Associated Lion Workshops. Engaged in urban and architectural projects of various scales, he is also committed to a more forward-looking approach to urban planning and is, in particular, co-author of the book S(t) imulation Pavillonnaire (édition Archibooks).

Guillaume Cantardjian. Born in 1985, Guillaume is an HMONP architect, a graduate of the City & Territories School of Marne-la-Vallée, he is involved in new equipment and housing projects as well as in rehabilitation. He benefits from solid experience acquired in Parisian architectural agencies including Ateliers Lion associés, Patrick Berger architect and Kalaycyian & Djalili architects.