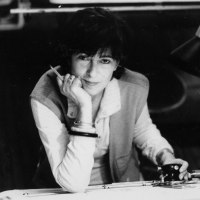 Cini Boeri. (Milan, 1924 - September 9 2020). Graduated from the Milan Polytechnic in 1951, after a short internship in Giò Ponti's studio, she began a long collaboration with Marco Zanuso. She began her professional activity in 1963, dealing with civil architecture and industrial design.

She has designed single-family homes, apartments, museum installations, offices, shops in Italy and abroad, dedicating great attention to the study of the functionality of space and the psychological relationships between man and the environment. In the field of industrial design she has been particularly involved in the design of elements for furniture and building components. Several of his creations are present in museums and international exhibitions.

She has held conferences and lectures at various universities and institutions in Italy and abroad, in Berkeley, Barcelona, ​​at the Nucleo del Deseno Industrial in Sao Paulo, at the College of Architects in Rio de Janeiro, at the Cranbrook School in Detroit, at the Southern California Institute. of Architecture by Vico Marcote (CH), at the Pacific Design Center and UCLA in Los Angeles, at the Mendrisio Academy of Architecture, University of Italian Switzerland.

In the years '81 -'83 she carried out courses in "architectural design" and "industrial design and furniture" at the Faculty of Architecture of the Politecnico di Milano. Member of the Board of Directors of the XVI Triennale di Milano. She participated in numerous juries of international competitions and received numerous international awards. Appointed ADI Honorary Member, 2012.