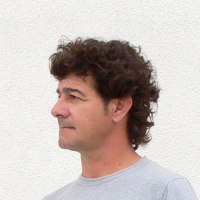 Gerardo Caballero was born in Totoras, Argentina, in 1957. He studied at the Architecture School of the National University of Rosario from 1976 to 1982. As a student, between 1976 and 1982. As a student, between 1978 and 1981 he worked at the Shiira-Albano studio in Rosario. During the years 1983 and 1985 he worked as a collaborator in the Korea-Gallardo-Mannino studio based in Barcelona. In 1986 he moved to the United States and obtained his Master in Architecture, Washington University, Saint Louis.

In 1988 Gerardo moves back to Argentina and starts his professional career in Rosario, being partner with Architect Ariel Giménez up to 1992. In 1993 he founds Caballero Fernández Arquitectos together with
Maite Fernández, which continues until 2013. Since 2013 he works on his own.

Gerardo’s works have been recognized, exhibited and published in America and Europe, and he has received many prizes and awards, as well as honorable mentions in national and international architectural design competitions.

He is a founding member of Group R in Rosario.