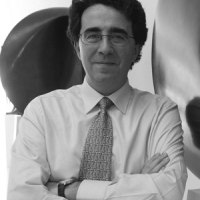 Santiago Calatrava (Valencia, 1951) Born in 1951 in Valencia. Trained at the School of Fine Arts and Crafts in Valencia, where he studies at the newly opened Higher Technical School. In 1975, he joined the Federal Institute of Technology in Zurich, obtaining a doctor's degree in 1981. In this city he established his first architecture studio and it is here that he obtained the first prize-winning participation in 1983, for the design and construction of the Station of Zurich train

His training as an artist, architect and engineer drives him to build a global work of art which gives all his works a great wealth and multiplicity of connotations. In 1984, Calatrava, designed and built the Bach de Roda Bridge in Barcelona. This is the beginning of the successive bridge projects that will be carried out later and that give him his great reputation as an international architect and engineer.

Calatrava establishes the second office of his firm in Paris, in 1989, while working on the project of the Lyon airport station, France (1989-1994) The third office places it in the city of Valencia, in 1991, to facilitate your last job: a huge cultural complex and urban intervention in the City of Arts and Sciences of Valencia.

Since 2000 some of his most outstanding projects are: the expansion of the Milwakee Museum of Art, Wisconsin, USA (2001), the first building that Calatrava made in the United States; the Olympic Sports complex in Athens, Greece (2004) or the Fourth Bridge over the Grand Canal, Venice Italy (2008). He is currently working on design and construction projects worldwide, including the World Trade Center Transportation Hub in New York or the recently opened Peace Bridge in Calgary (2012). There are innumerable awards received by Santiago Calatrava, among others the Medal of Merit of Fine Arts, of the Spanish Ministry of Culture (1996) and Prince of Asturias Award for the Arts (1999).