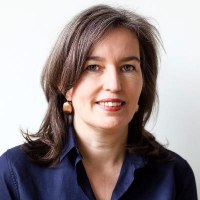 Nathalie de Vries (Appingedam, the Netherlands, 1965) is a co-founder and principal architect and urban designer of MVRDV, an interdisciplinary studio that works at the intersection of architecture and urbanism. The award-winning Dutch practice was set up by De Vries alongside Winy Maas and Jacob van Rijs in 1993 and has established an international identity with a wide variety of building typologies and scales that are self-generated, innovative, experimental, and theoretical.

Over the past 25 years she has designed and realised projects  such as Villa VPRO (1997), Silodam Housing (2003), and the Spijkenisse Library (2012) as well and the masterplans for Nieuw Leyden (2013) and Westerpark West in Amsterdam, the Netherlands (2015). Recent projects include the award winning Baltyk office Tower in Poland (2012), as well as office projects in Łódź, Shanghai, and Colombo, housing projects in Rennes, France, San Francisco, USA and Amsterdam, the Netherlands. She also worked on Resilient by Design San Francisco and created leisure masterplans for sites in Shanghai and Thailand.

Her projects also include designs for three national monuments: the Stedelijk Museum Schiedam (2014), the award-winning Lloyd Hotel in Amsterdam (2004) and Buitenplaats Koningsweg in Arnhem (2010). As Chief National Railroad Architect De Vries has built up experience in transport infrastructure which she has translated into a series of projects.

In addition to her work for MVRDV, De Vries engages as Professor of Architectural Design at Delft University of Technology and Chairman of the Royal Institute of Dutch Architects. She regularly lectures at renowned universities and engages in international juries. In the past she held various positions, among them Professor of Architecture Kunstakademie Düsseldorf and Technical University of Berlin, Germany; Visiting Critic at Harvard GSD, Boston; Chief Railroad Architect for ProRail/NS; The Morgenstern Visiting Critic Chair at the Illinois Institute of Technology, Chicago. Besides this she is and has been a board member of various Dutch art and design museums and institutions, among them the Groninger Museum and Witte de With Centre for Contemporary Art.

Currently she is curating an exhibition at AUT in Innsbruck, Austria, about MVRDV’s typologies which will open mid-2019.