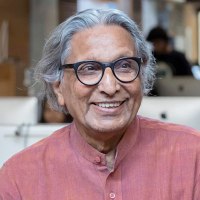 Balkrishna Doshi. Born into a traditional Hindu family in 1927, Balkrishna Doshi grew up in the atmosphere of the Indian independence movement championed by Mahatma Gandhi and Rabindranath Tagore. He began his architecture studies in 1947, the year India gained independence, at the Sir J.J. College of Architecture Bombay (Mumbai). In the 1950s, he boarded a ship to London, where he hoped to join the Royal Institute of British Architects, and eventually moved to Paris to work under Le Corbusier.

Doshi’s association with Le Corbusier and later Louis Kahn lasted over a decade and made the young architect familiar with the vocabulary of modernist architecture with a special emphasis on elemental forms and building materials. In 1956, Doshi opened his own practice in Ahmedabad and called it Vastu-Shilpa (»vastu« describes the total environment around us; »shilpa« means to design in Sanskrit). At the age of 35, in 1962, he founded the School of Architecture at the Centre for Environmental Planning and Technology (CEPT) in Ahmedabad. In 1978, Balkrishna Doshi established the Vastushilpa Foundation for Studies and Research in Environmental Design with the aim of developing indigenous design and planning standards for built environments appropriate to the society, culture, and environment of India. Doshi is the recipient of numerous awards and distinctions such as the Global Award for Lifetime Achievement for Sustainable Architecture, the Aga Khan Award for Architecture, and the Gold Medal of the Academy of Architecture of France, among others. He is a Fellow of the Royal Institute of British Architects, the Indian Institute of Architects, and the Institut Français d’Architecture, and an Honorary Fellow of the American Institute of Architects. In 2018, he was the first Indian architect to be awarded the Pritzker Prize.