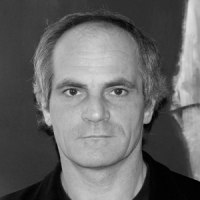 Frédéric Druot was born on January, 31st 1958 in Bordeaux, France. He is a DPLG Architect, graduate from the Bordeaux School of Architecture in 1984. In Bordeaux, 1987, he established in association with 4 architects the architecture agency Epinard Bleu (Blue Spinach) that has been considered a front line for the French architecture of the 90’s and won the award: "Album de la Jeune Architecture." In 1991, he opened his own agency Frédéric Druot Architecture (FDA) in Paris.

The work philosophy is based on the topic of thought and scales studies are not limited and it subsists a multi disciplinary dialogue. Design, music, mode, urban design, architecture and landscape open a path of research and guide the reflection around the project idea. The problematic of housing and urban design are currently representative of the main activity of the agency. There is a particular preoccupation and care to existing situations. The economy represents a guideline in the conception and the control of architecture projects.