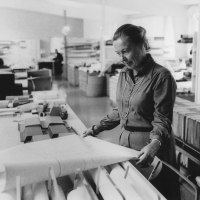 Elsa-Kaisa Mäkiniemi / Elissa Aalto, (22.11.1922–12.4.1994) graduated as an architect in Helsinki in 1949 and commenced work at Alvar Aalto’s architect’s office in that same year. She began using the name Elissa after marrying Alvar Aalto in 1952.

Elissa Aalto worked in Aalto’s office at a time when several competitions and sizeable public commissions were underway. She worked hard as one of the office’s architects and was soon put in charge of a number of major building projects, such as Säynätsalo Town Hall and Maison Louis Carré.

The newly-wed Alvar and Elissa designed the Muuratsalo Experimental House to be their summer residence. As Alvar Aalto grew older, Elissa’s role in the office as the conveyor of Aalto’s ideas was accentuated. After Aalto’s death, Elissa ran the office, carrying to completion several unfinished projects, such as Seinäjoki Civic Centre, the Aalto Theatre in Essen, and Riola Church. Several complementary construction and renovation projects on completed Aalto buildings were also carried out under Elissa’s leadership.

Elissa Aalto also made independent architecture designs: of which we can mention Villa Hauta-aho (1982–83) in Seinäjoki and the SOS Children’s Village in Tapiola, Espoo (1960–70). She also designed textile patterns such as H55, shown at the Helsingborg Exhibition in 1955, which was in Artek’s range.

Elissa was a long-term resident of the Aalto House on Riihitie road in Helsinki and also continued to spend summers in the Muuratsalo Experimental House right up to the end of her life. In her will, Elissa Aalto left the Experimental House in the care of the Alvar Aalto Museum, under the ownership of the City of Jyväskylä, and as a place for museum audiences to visit. It was on Elissa’s initiative that Studio Aalto was sold to the Alvar Aalto Foundation in 1984.