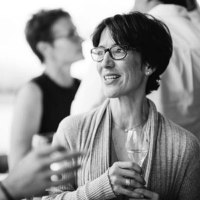 Ana Elvira Vélez, born in 1966 in Colombia, is an architect trained at the Architectural Association School of Architecture in London. Her most notable work is her proposal for the Botanical Garden in Medellín. She was a professor at the Universidad Pontificia Bolivariana, lecturer and jury in numerous universities and architecture meetings. As a young girl she was passionate about painting and drawing.

She began studying architecture at the Universidad Pontificia Bolivariana in Colombia, then moved to London where he finished her diploma in the AA in 1992. During 1991 and 1992 he worked in the firm of architect Wiel Arets in Maastricht, Holland. She returned to her country and opened an office in Medellín, working on the design of collective housing and public space, obtaining several distinctions in national and international biennials.

Winner of the Germán Samper Gnecco Award in 2004 with the La Playa Apartments Project (with Architect Juan B Echeverri) at the XIX Colombian Biennial, and the Urban Design and Landscape Award in 2010 with the Botanical Garden Medellín - Exterior Perimeter (with the Arq. Lorenzo Castro) in the XXII Biennial of Colombia. And at the XXIIII Colombian Biennial in 2014 she received a Mention in the Architectural Project Category with the Alto del Mercado Project in Marinilla, Antioquia (with Arch. Juan B Echeverri).

In the XXVI Biennial of Architecture Colombia she was awarded another Mention for the Hispania Educational Park and second place for Reconstruction of Salgar. She has been a jury in several national competitions and jury of the VII Ibero-American Architecture and Urbanism Biennial (BIAU) 2010. Lecturer of national and international events such as the VII Architecture and Design Congress of Arquine; "Caja Box" - Ciudad de México, 2006; "Colombia at Columbia" Avery Hall Columbia University - New York, 2012; 1st Congress of Sustainable Collective Housing - Barcelona, ​​2012; National Congress of New Zealand NZIA and Cornell University - USA in 2015 and Radcliff Institute for Advanced Studies, Harvard University in 2017.

Since 2014, she has been a teacher of the "Urban and Environmental Processes" Master's Program Urbam EAFIT and a consultant for the same school where she leads the Casa + Entorno line, and currently directs the Housing and Habitat Laboratory in COMFAMA with collective housing projects in Medellín and the region of Antioquia.