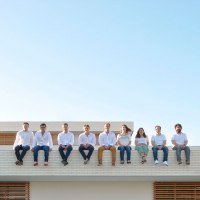 Eneseis is an Architecture and Urbanism studio located in Alicante, Spain. It began its activity in 1998 with the first orders and awards in competitions. In a short time they were already carrying out all kinds of residential, public works, commercial, civil works or planning projects that, gradually, became more complex and important.

They have a team made up of the architects Daniel Solbes Ponsoda and José Luis Durán Arribas and the engineer Vicente Perez Pla.

Daniel Solbes Ponsoda is an architect from the Escuela Técnica Superior de Arquitectura de Valencia in 1998, with an exchange course with Ecole d'Architecture de Paris La Villete in 1994 and a course at School of Architecture Surveying and Building 1996.

They are defined by constant work and learning, with a discourse that arises from the explanation of an extensive and diverse work carried out with dedication and involvement. In their projects they analyze the environment, understood in a broad sense, and identify the opportunities that add value and the way in which the projects are able to incorporate them into their architectural proposals, eventually being those proposals recognized through awards or publications.