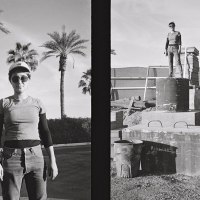 Sofia Enriquez is a visual artist from the Coachella Valley, California, whose practice consists of large-scale murals, up-cycled and re-painted vintage clothing, and fine art works. Her first forays into art were volunteering for the Palm Springs Art Museum (where she would eventually teach), the Coachella Valley Art Scene and other local arts organizations. Simultaneously Enriquez developed her own art-infused fashion line ‘MUCHO’ where she incorporated her own designs onto vintage clothes.

In 2014, Enriquez graduated from Otis College of Art & Design in Los Angeles, California with a BFA in Communication Arts. Since then, Enriquez has painted over 30 murals and public art works for cities in California. She has also created portraits internationally in Mexico City, Tokyo, and Paris and for Goldenvoice music festivals - including the Coachella Valley Music and Arts Festival.