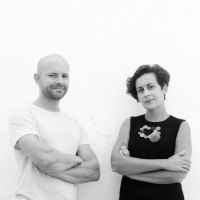 Estudio Ji Arquitectos is a team founded in 2005 by Jorge Frías and Irene Zurdo in Madrid; both are studying at the European University of Madrid (1998-2005).

In the first years of their professional activity (205-210) they collaborate in parallel with different prestigious Madrid studios such as Rafael de La Hoz or Picado de Blas, where they acquire experience in carrying out public and private works projects, in addition, to collaborate in projects that obtained important national and international architectural awards.

Since 2010, Estudio Ji Arquitectos has formed its own multidisciplinary team made up of architects, building engineers, industrial engineers, model makers, photographers, and many other professionals who intervene in the processes of a project and its work. It is at this stage, with a study in Madrid, they get their first awards and recognitions through architectural ideas competitions, from which they promote their study combined with other fields of the profession such as teaching, design, and self-production of objects and furniture.

Estudio Ji, during these 15 years of professional practice, has been selected for numerous exhibitions and publications in the press on built work, award-winning competitions, or on its product design pieces. In 2013 they inaugurated in Altea (Alicante) a “fusion” space, architecture and design studio + showroom + gallery where they promote objects and works of Spanish production designed by Spanish architects and designers. Here “plug system” was born, a piece designed by Estudio Ji to respond to questions of habitability, ephemeral occupation, and storage, both from a “contract” and “habitat” point of view and with which they obtained the First RED_ Aede Prize in Product Design Madrid for the best piece of furniture for the habitat / 2013.

Currently, with "head office" in Altea (Alicante), they carry out proximity projects on the Mediterranean Coast and Madrid, insistently competing and investigating projects throughout the National territory.