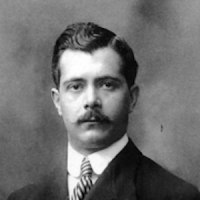 Antonio Flórez Urdapilleta was born in Vigo in 1887 and died in Madrid in 1941.

Architect, and son of the architect Justino Flórez Llamas, he was was formed at the Institución Libre de Enseñanza, where he was a pupil of Manuel Bartolomé Cossio and fellow of Antonio Machado. He graduated in 1904 from Technical University of Madrid. That same year he won a place as a pensioner at the Academy of Spain in Rome, from where he traveled the rest of Italy, Greece, Turkey and Vienna. Back in Spain he became a professor at the Technical University of Madrid where he became professor of the subject Copy  of Ornamental Elements.
In 1911 he won the competition for the construction of Froebel Schools in Pontevedra. In 1913 he designed the new headquarters of the Residencia de Estudiantes. As a member of the Board of Queen Victoria Eugenia he built the Cervantes and Prince of Asturias school groups in Madrid. On the death of Francisco Giner he designed and built the Pantheon of the Institución Libre de Enseñanza at the Madrid Civil Cemetery. Since 1915 he became the conservative architect of the Royal Theatre in Madrid. In 1919 he was appointed Minister of Public Instruction and a year later he became the chief architect of the newly created Technical School Construction Bureau of the Ministry of Public Instruction and Fine Arts, where he made an extraordinary and fruitful work in the field of school architecture that was truncated by the civil war.

Academician of the Real Academia de Bellas Artes de San Fernando in 1932, with a speech dedicated to the teaching of architecture, the years of the civil war were extremely bitter for him since he was removed from the office as chief architect at construcciones Escolares, first by the Government of the Republic in 1937, and then by the government of General Franco in 1939.