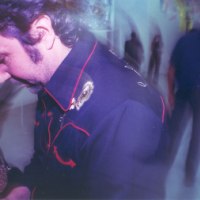 Daniel González was born in Argentina in 1963, lives and works between Berlin and New York. His work is focused on breaking down of barriers between categories and the rite of celebration; it takes the form of hand-sewn sequined banner-paintings on canvas, performances and large-scale public projects, or “ephemeral architectures” inspired by Baroque machines by Bernini. González creates highly evocative, irrational worlds, areas of freedom in which existing conventions collapse.

In 2007 Daniel González in collaboration with artist Anna Galtarossa developed the first large scale public projects. The first one, Chili Moon Town Tour, was a utopic floating city, installed in the Bosque de Chapultepec Park in Mèxico City. The second one was produced in Lambrate (suburban area in Milan, Italy) and entitled Homeless Rocket with Chandeliers, an installation centred on a crane 35 meters high in use on building site during the day. Its transformation into a work of art at the end of the working day was announced by neon lights, smoke and sirens. González continued the production of ephemeral architectures with the public project Pop-Up Building for Witte de With Festival in Rotterdam in 2010 this was his first pop-up work in which he covered a historical church with cut-out cardboard, like a gigantic pop-up book.

In 2011 he took part in the Biennale of the Museo El Barrio in New York with the special project Pop-Up Museo Disco Club, a sculpture-installation that transformed the Fifth Avenue façade and lobby of the museum into a block party lasting six months.
In Verona in 2013 the artist presented the public installation Romeo’s Balcony, an idea of balcony installed so as a to mirror the balcony of Juliet’s house; this work was made in collaboration with ArtVerona art fair, Veronese City Museums and Teatro Stabile Verona repertory theatre. In 2014 Noah Khoshbin, curator at Robert Wilson Watermill Center (Long Island, NY, USA) invited the artist to the Luminaria Festival in San Antonio, Texas, with his performance Bohemian Texas Street Home Fashion Show.

He started 2015 with the performance for the Daniel González D.G. Clothes Project Aaaaaaahhh Anthology of a Liar, designed for Marsèll’s showroom in Milan, and with Portrait Fashion Factory, realized in the Santo Spirito monumental complex in Rome, where he transformed clothes, discarded by the performers or having special affective value for them, into Wearable Sculpture Portraits. He then opened a solo show, Super Reality at the Valentina Bonomo Gallery in Rome and, in September, he presented Pop-Up Building Milan, a public ephemeral architecture for the Marsèlleria permanent exhibition in Milan, where he transformed its external appearance into a gigantic cardboard fairy-tale, a dynamic structure inspired by children pop-up books over an area of 250 square meters.