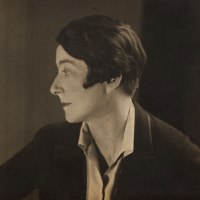 Eileen Gray (1878-1976) is an architect and furniture designer born in Ireland. She is considered one of the most influential women of the 20s in those fields.

In 1901 she enrolled in drawing at the Slade School of Fine Arts in London, and during his visits to the Victoria and Alberto Museum he developed her admiration for the Asian works of lacquer and in 1902 she settled temporarily in Paris to continue her studies in drawing at the École Colarossi. Gray settled permanently in Paris in 1906. She practiced little as an architect due to the restrictions that women had at that time in the architecture profession. Among his scarce projects are Villa E-1027 and Villa Tempe á Pailla, on the Costa Azul.

She obtained more fame as an interior designer and furniture designer. Although after the Second World War was losing this reputation little by little. Only in her last years of life did she return to that fame when the designer Zeev Aram took control of the rights of her work and rediscovered it to the world.