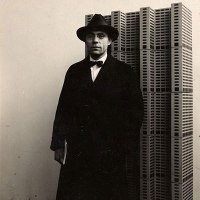 Ludwig Karl Hilberseimer (Karlsruhe, September 14, 1885 - Chicago, May 6, 1967), was an architect and urbanist attached to the expressionism, that thanks to his urbanistic projections and tests, is considered one of the German architects of greater international projection of the twentieth century. He is known for his relationship with Mies van der Rohe and as a teacher at the Bauhaus.

Hilberseimer studied at Karlsruhe Technical University between 1906 and 1911 where he was influenced by one of his professors, Friedrich Ostendorf and by the sober baroque buildings between which he had lived, reflected in his conception of the urban phenomenon and being able to interpret his latest urban works as a prolonged reflection and a persistent criticism of this type of traditional urban uprising. After finishing his studies, in 1911, he moved to Berlin where he met Mies and began his activity as a freelance writer and critic, working in magazines such as Das Kunstblatt and Sozialistische Monatshefte. Until about 1918, Hilberseimer also worked in architectural offices such as Behrens and Neumark, or managed the planning office for Zeppelinhallenbau in Berlin Staaken.

It was between 1918 and 1919 when Hilbersimer and Mies undertook a close relationship at the time of the founding of the November Group and the Albeitsrat für Kunst, where he worked as an architect and urban planner publishing some essays on art and architecture. During his collaboration with Mies they expressed their avant-garde concerns in visual arts and architecture in the magazine "Material zur elementaren Gestaltung" for which Mies claimed the collaboration of Hilberseimer, giving both architects an important international projection. Other publications in which Hilberseimer worked before joining the Bauhaus were "Bauhandwerk und industrie" or "Grobstadarchitektur", as well as architectural and urban planning works such as the planning of the "Weißenhof colony" for the architecture and urbanism exhibition held in 1927 in Stuttgart and that took by title "The housing."

It is not surprising that with this professional curriculum, in 1928, the new director of the Bauhaus Hannes Meyer will count on him to be part of the team of the newly created architecture section. Hilberseimer was entrusted with the direction of the construction and urbanism classes and thus became one of the most interesting teachers who worked in the Bauhaus during the last stage of the school. The architect was in charge of the courses of learning of constructive design and of the seminar of construction of houses and urbanization, always from a position of lefts, which implied a search of architectural and urbanistic solutions conditioned by the social circumstances and by the possibility of the poor classes for paying a house.

His plans and studies reflected his interest in the problems arising from the construction of siedlungen, investigating the relationship between the concentration of buildings and the type of housing for people with few means, leading to a design of special unifamily houses based on his analyzes on urbanism. During the period of Mies as director of the Bauhaus, Hilberseimer became one of the most important teachers of the school, dedicated both to organizational work and restructuring of the curriculum and to the advice of the students themselves.

After the closing of the Bauhaus in 1933, Hilberseimer worked as an architect in Berlin until 1938, when due to his social position, he had to emigrate along with other professors and students of the Bauhaus to the United States to avoid the censorship exercised by the newly imposed party. German National Socialist The German architect settled in Chicago, where he was able to resume a close and friendly collaboration with Mies, working at the Illinois Institute of Technology, where he taught until his death in 1967. Since 1955 Hilberseimer directed the department of urban planning and regional planning, writing some of your most important texts.