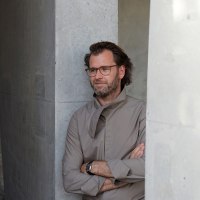 Anne Holtrop (b. 1977, Netherlands) lives and works in Amsterdam and graduated with distinction from the Amsterdam Academy of Architecture in 2005. He started his own architectural practice in 2009. Currently, the studios are based in Amsterdam, Netherlands, and Muharraq, Bahrain. In 2015, the first two major buildings designed by the Studio, Museum Fort Vechten and the National Pavilion of the Kingdom of Bahrain, were completed.

For his work he received several grants from the Netherlands Foundation for Visual Arts, Design and Architecture. In 2016, he was awarded the Iakov Chernikhov International Prize, in 2008 he was awarded the Charlotte Köhler Prize for Architecture by the Prince Bernhard Cultural Foundation. Besides his work as an architect, he is an editor of the independent architectural journal OASE, visiting lecturer and external critic at various art and architecture academies and founder of INSIDE.

The Studio is currently working on new stores worldwide for Maison Margiela with the first one due to open on Bruton Street, London this year; an exhibition pavilion for CERN in France, and several UNESCO-listed heritage buildings in Bahrain: Murad Boutique Hotel, Siyadi Pearl Museum and the Qaysariya Suq.