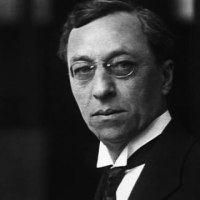 Kandinsky was born Moscow in 1866 into a comfortable and cultured family. He learnt German from his grandmother, and took lessons in piano, cello and drawing. In 1885, he began to study law at the Moscow faculty, going on to complete his thesis. But when he was just on the point of obtaining a teaching position, in 1895, he decided to break with his legal career and devote himself to art. He then went to Munich to learn painting, and very soon set up as a teacher himself by creating, with other Munich artists, the Phalanx art group. Through this association he met Gabriele Münter, a German-American artist, who was his companion until 1914. With her, he travelled throughout Europe and North Africa and then, in 1906, established himself in Paris for a year. At this time, his works consisted of small paintings, often landscapes in the impressionist style, like a travel logbook, which gained him the reputation of a dilettante in the Parisian milieu.

It was not until 1908, back in Germany, where he was living with Gabriele Münter in Murnau, that his real artistic career began. Although his favourite themes – landscapes, popular culture – remained the same, he treated them in an increasingly abstract manner with a growing autonomy of colours. In 1914, when war broke out, he left Munich to take refuge in Switzerland, then went to Moscow where he remained until 1921. There, he began to write a text, conceived as the companion piece to Concerning the Spiritual in Art, “On Materialism in Art”, which would not be published until 1926 as Point and line to plane. During this period, he painted little, favouring, for material reasons, drawing and works on paper. Then, as the new regime established itself, he devoted his attention to the creation of the country’s new artistic structures, such as the IZO, the state body responsible for fine arts.

Nevertheless, his situation, as much artistic as financial and political, had become precarious. During an official mission in 1921, he decided to remain in Germany with his wife Nina. Walter Gropius, director of the Bauhaus Movement, offered him a teaching position, which he would occupy up until the school’s closure in 1933 and his departure for France. At this time, his German nationality obtained in 1927 having been revoked, the stateless Kandinsky established himself in Paris. It was not until 1939 that he became a French citizen, in extremis before the start of the Second World War. Until 1944, the Kandinskys led a secluded life in Neuilly-sur-Seine, where the artist pursued his final research objectives.