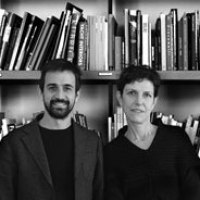 Labics architecture was founded by Maria Claudia Clemente, Francesco Isidori and Marco Sardella in 2002. The main aim was to convey, under a unique name, those architects, artists and designers who identify with a shared experimentation project in the field of architecture.
Labics research activity aims at an architecture capable of overcoming the status of a singular object, in favor of an architecture that becomes territory, background, structure.

Recently Labics has received the honorable mention for the contest of the Guggenheim Museum in Helsinki and the tourist Klekovaca Center of competition in Bosnia and has won the second prize in the international contest for the design of the station no. 11 for the Tabriz metro (2016). In 2017 Labics has won two major competitions: one for four residential buildings within the master plan of Cascina Merlata in Milan, the second one for the extension of the Palazzo dei Diamanti in Ferrara.