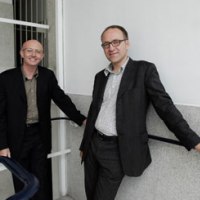 Maccreanor Lavington Architects was established in London and Rotterdam in the early nineties by Gerard Maccreanor and Richard Lavington. Their diverse portfolio ranges from individual buildings to large scale urban design, with particular expertise in housing, public buildings and the regeneration of town centres and former industrial zones. They have received numerous awards, most recently an RIBA National Award (2013), the New London Architecture Award (2013) and a Housing Design Award (2013). They also received the prestigious RIBA Stirling Prize in 2008 alongside Feilden Clegg Bradley Studios and Alison Brooks Architects.

Gerard Maccreanor. B.Sc. B.Arch. RIBA. Gerard graduated in 1987 from Bath University and established Maccreanor Lavington Architects in partnership with Richard Lavington in 1992. Gerard has overseen the design and construction of over 2500 residential units, many of which form a part of larger mixed use schemes.

He is the managing principle for a number of large scale urban design projects, including; South Dagenham West; London (38ha), Thameside West, London (63ha) and Barking Riverside (52ha). Gerard has been leading a series of projects in collaboration with KCAP, including; the redevelopment of Bishopsgate Goodsyard, London; (5ha) and the Royals Business Park, London; (21ha).

Gerard is also overseeing a number of infrastructure projects, which include the DLR extension from Beckton to Dagenham in London, a new metro station at Kraaiennest in Amsterdam and a transport interchange in Dagenham, London.

He was a member of the RIBA Competition Advisory Committee (1991-1995), the Europan UK secretariat (1993-1998), assessor for the Arts Council of England Lottery Fund (1994-1996). He was a Jury member for various European competitions like Europan 5 (The Netherlands) and Europan 6 (Spain). Gerard has recently been appointed as a member of the CABE Design Review Panel (2009-2014).

Gerard has taught at many University Schools of Architecture including The Bartlett and Westminster in London, Canterbury, Bath, Belfast, The Technische Universiteit Delft and The School of Architecture, Stockholm.

Richard Lavington. B.Sc. B.Arch. RIBA. Richard graduated in 1987 from Bath University. He established Maccreanor Lavington Architects in 1992 with Gerard Maccreanor. Under his direction the office has gained considerable experience in the design of mixed-use buildings and neighbourhoods and has developed collaborations with a number of other architectural offices on a wide variety of projects.

Richard has led the office's work on many projects, including Accordia in Cambridge, a Church and Community Centre in Salford, the Lux in Hoxton Square, London and a new hotel close to St George's Circus, London and has worked on framework plans for the town centres in both Basildon and Chatham.

Until recently, he was also a Studio Leader at the University of Bath where he was responsible for directing the final year Masters studio, along with Sarah Hare and he has previously taught at many other University Schools of Architecture including Cambridge, Nottingham, Canterbury, The Queens University Belfast and the Mackintosh School of Architecture, Glasgow.