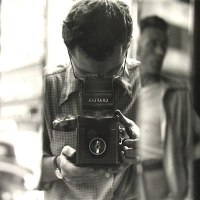 Saul Leiter was born in 1923 in Pittsburg, the son of an orthodox Jewish rabbi, and was destined to follow his father's path. But at 23 he moved to New York with the intention of becoming an artist. There he became friends with the abstract expressionist painter Richard Pousette-Dart, who experimented with the photographic language, and with the master of "Concerned Photography" (committed photography) W. Eugene Smith. Through contact with that artistic world close to photography and thanks to the fact that her mother had given her a camera as a teenager, she recognized the creative potential of photography and adopted it as part of her pictorial language.

Leiter's practice of painting and photography throughout his career can be followed through his black and white color images. The dynamic between these two media had an impact on his artistic look, creating a new visual rhythm. Its typical photographic language is that of abstraction: it compresses spatial dynamics, obstructs lines of vision and renounces a centered perspective. Leiter's pictorial sensibility is visible in the soft and desaturated contrasts inherent in his photographs. In addition, his use of reflection makes his compositions become more broken, more tangled. This is where he clearly distinguishes himself from other "Street Photographers" of the New York School such as William Klein or Robert Frank.

In the 50s he began to work with color becoming one of the pioneering photographers to use it. He applied a pictorial quality to color and achieved a polychrome symphony that mixed the brightness of the neons, the haloes of street lamps and the golden stains of New York taxis, and turned the city into a contemplative, intimate and almost abstract landscape.

Leiter combined photography and painting all his life, and continued painting daily until his death in November 2013 at age 89. But the camera became the medium through which he managed to capture and interpret the life of New York City in multi-layered compositions, as well as in intimate scenes, as no one had done before.