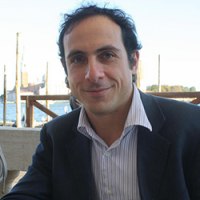 Emmanuele Lo Giudice (Palermo, Italy, 1975) is an Italian architect and artist, has participated in several important exhibitions and festivals of art and architecture in Italy, Switzerland, Venezuela, Germany, Spain and Colombia: FESTARCH Perugia 2011; Hamburg Art Week 2012; Museum Architecture Leopoldo Rother of the National University of Colombia in Bogota, la Casa Velázquez in Madrid, the University of Architecture of Venice IUAV and ARCHIZOOM in Lausanne.

Since the year 2010, Yona Friedman and Emmanuele Lo Giudice have developed some projects, especially analyzing the tubject of the museum and reaching even more radical solutions over other projects by Friedman, considering the following projects: Venice Street Museum 2012; Perugia Street Museum 2011; Venice, 2010 The Museum of Civilization.

Emmanuele Lo Giudice work is multidisciplinary, where architecture, drawing, photography and readymade become instruments for critical analysis of the architecture and the city. His works have been acquired for the important Archivio Progetti IUAV of Venice and some of his books and articles have been published in ABITARE and SKIRA.

The main idea in these projects is that the Earth is over-built, so what is required is not more buildings but learn to creatively manage the space you have. Architecture and urbanism as frameworks for human life and creativity is well understood. Public Museums, low budget, which does not necessarily have to be buildings, but a visual display and a conceptual transformation of this new way to see the space, a museum focused on the content and management of an area not built.