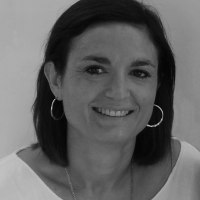 Olatz Maestre (Bilbao, 1976). Graduated as an architect specialising in Urban Planning from the University of Navarra (ETSAUN) in 2002. She joined IDOM in 2002, where she has been working ever since.

Among her most outstanding works for public bodies and administrations are the drafting of the projects and Management of the Works for the Refurbishment of the Old Metropolitan Seminary of Zaragoza for a New Municipal Administrative Centre (1st. "Accessibility Award 2008), or the New Building for the Headquarters of the Provincial Court of Zaragoza; she has also carried out works related to transport such as the Calatayud Bus Station (Finalist in the García Mercadal Awards 2011), and the Building of Workshops and Garages for the tram in Tenerife; or sports facilities such as the General Services Building for the Helios Swimming Centre in Zaragoza (Finalist in the García Mercadal Awards 2013), or the design of sports complexes such as the Abechuco Sports Centre Swimming Pools and the San Andrés Civic Centre in Vitoria. Her recent projects include the logistics warehouse and offices for Amazon in Zaragoza and Badajoz, the Aulario Building at San Jorge University, the new Marianist school in San Sebastián and the General Services building at San Jorge University (1st Prize XXXVII Ricardo Magdalena Award, 2018; Finalist XXXII Edition Fernando García Mercadal Architecture Award, 2018).