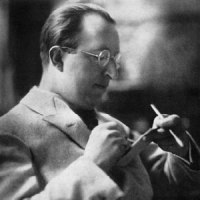 Erich Mendelsohn was born in Allenstein (Olsztyn), East Prussia. His birthplace was at the former Oberstrasse 21, now no. 10 Staromiejska street. A plaque embedded on the wall on the side of Barbara street commemorates his place of birth.

He was the fifth of six children; his mother was Emma Esther (née Jaruslawsky), a hatmaker and his father David was a shopkeeper. He attended a humanist Gymnasium in Allenstein and continued with commercial training in Berlin.

From 1912 to 1914 he worked as an independent architect in Munich. In 1915 he married the cellist Luise Maas. Between 1910 and 1953 they corresponded with each other; these materials provide insight into the lives of an artist and couple who experienced a changing international landscape, including their fleeing from the Third Reich in Germany in 1933. Through his wife, he met the cello-playing astrophysicist Erwin Finlay Freundlich. Freundlich was the brother of Herbert Freundlich, the deputy director of the Kaiser Wilhelm Institut für Physikalische Chemie und Elektrochemie (now the Fritz Haber Institute of the Max Planck Society in the Dahlem district of Berlin). Freundlich wished to build a suitable astronomical observatory to experimentally confirm Einstein's Theory of Relativity.

Through his relationship with Freundlich, Mendelsohn had the opportunity to design and build the Einsteinturm ("Einstein Tower"). This relationship and also the family friendship with the Luckenwalde hat manufacturers Salomon and Gustav Herrmann helped Mendelsohn to an early success. From then until 1918, what is known of Mendelsohn is, above all, a multiplicity of sketches of factories and other large buildings, often in small format or in letters from the front to his wife, Louise Mendelsohn (née Maes) (1895–1980). The 2011 documentary film by Duki Dror titled "Incessant Visions" is about Erich Mendelsohn and his wife, in which Dror animates the memoirs of Louise and the letters.