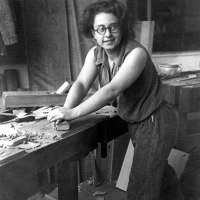 Wera Meyer-Waldeck (Dresden, Germany, May 1906 - Bonn, Germany, April 1964). She began her studies in 1921 as an educator at the Dresden Women's School, graduating in 1924. Between 1924 and 1927 she studied at the Academy of Applied Arts in Dresden. In 1927 she entered the Bauhaus in Dessau. In her beginnings she studied with Marcel Breuer in the carpentry workshop making stools, sunbeds, folding tables... In 1928 she studied in the construction department with Hannes Meyer. In 1929, Wera worked on the design of furniture for the ADGB school in Bernau, near Berlin. In 1930 she interrupted her studies at the Bauhaus due to the death of her father. In 1931, she resumed her studies at school with Ludwig Hilberseimer and Mies van der Rohe. The following year, she finished her studies at the Bauhaus with a thesis on "elementary school and kindergarten of eight grades".

In 1939 she began her professional career as an architect, working for the National Railway Construction Authority. Between 1946-1948, she began working as a professor of interior design at the State University of Applied Arts in Dresden.

In 1948 she presented herself as an independent architect in Walldorf (Germany). The following year, she worked for Hans Schwippert in projects such as the interior design of the German Parliament office in Bonn, the interior design of two ministries, the Viktorshöhe guest house of the Federal Government and the Federal Chancellery. Notable Meyer-Waldeck projects include: the reconstruction of a hotel in Koblenz, several secondary schools, four collective housing units (Laubenganghäuser) for refugees from the East, the Catholic Foreign Relations Mission and a student residence in Bonn. In addition, Wera was a member of the Association of German Architects, of the Women's Federation of Germany and was the author of numerous articles in journals. Her last project is a dormitory of students in Bonn, in 1962.