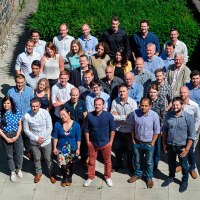 1960's New staff members were joining the practice thick and fast as the workload increased with jobs such as George Watson’s music school (1964) and an extension for Standard Life on St Andrew Square (1968) keeping the practice busy. The company changed to Michael Laird & Partners in 1967.

1970's More work meant an increasing amount of staff, and in 1972 the main architectural part of the office moved to the current premises on 5 Forres Street. Highlights in this decade included the King’s Buildings for Edinburgh University and another extension for Standard Life, this time on George Street.

The 1980’s brought a new variety of work to the practice. We completed the Fettes Row Data Centre for RBS and a manufacturing plant in Livingston for W.L. Gore, both buildings we would refurbish in the future. The partnership also created the futuristic Cameron Toll Shopping Centre!

The 90’s brought about the cementing of long relationships with blue chip clients as they expanded. The partnership designed the celebrated Tanfield House and also the HQ building on Lothian Road, both for Standard Life, with large office buildings for RBS and Midlothian Council’s HQ rounding off a productive decade!

The noughties saw a change from partnership to limited company and a new style of architecture as ‘new blood’ took over, with Edinburgh Quay, RBS Gogarburn HQ campus , EHQ1 at South Gyle, Lochrin Square and many other large projects all being completed before the economic downturn took hold.

2010’s As they head towards 60 years of trading as Michael Laird Architects, they find ourselves working on a more diverse range of projects than ever before, and feel they have never been busier! Here’s to the next 60 years...