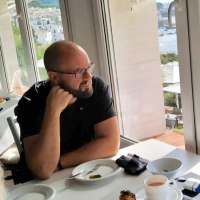 Manuel Monteserín is an architect, designer, artist and teacher. He directs the Monteserin Architects office, which focuses mainly on international projects. His latest work "Maritime and Pop Music Center in Kaohsiung" has been recently inaugurated. An 88,000 m2 complex in Taiwan consisting of two towers, two auditoriums, five restaurants, an exhibition center and six multi-purpose pavilions, as well as the entire urban development of the complex.

Monteserin Architects is among the 30 most influential firms in Spain according to The New York Times Style Magazine Spain. At the teaching level, it is worth mentioning his time at the I.E.D. INNOVATION LAB, from where he has promoted many projects, among others, The City on Mars, recently awarded by NASA.

On the artistic level, he works in the production of digital images from a more experimental field such as the Animalario series, or his Gif-Collages, or making final images for other architecture studios. Monteserín was one of the founders of León 11 Collective, from where he developed several projects and competitions with his colleagues.

Later he would create Manu-Facturas (www.manu-facturas.com), a place for digital experimentation of the image from where he develops his most artistic side. In 2011 he would form, along with two other partners from Madrid, the Madein Architects office where they would develop different international projects.

From 2015 he founded his own firm, Monteserin Architects, an independent architecture and design studio that is temporarily associated with different people or companies as a node of a large network of contemporary creation.

Among the recognitions that he has received throughout his professional career are the following:2019. SPECIAL MENTION. Casa de la Felicidad Competition in Bogotá. 2018. FIRST PRIZE UNIVERSITY LEAGUE. Competition for the design of the City of a million inhabitants on Mars. Prize awarded by NASA. Project carried out at the IED INNOVATION LAB.