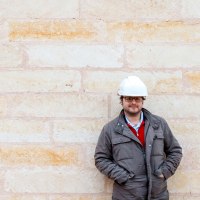 Tomás Montis Sastre (Palma de Mallorca, 1985) graduated as an architect from the Escuela Técnica Superior de Arquitectura de la Salle in 2010. Since 2015, he began his professional career forming the Montis Sastre Arquitectura studio in his hometown, after having collaborated in several national (Barcelona) and international (Belgium) studios.

Much of his professional work is based on the development of competitions and public architecture, having won various awards and recognitions, including the First Prize in the competition for the construction of a nursing home in Pórtol (Mallorca) or the First Prize for the construction of the first teaching building for scientific swimming pools in Europe, in addition to other awards and mentions in various competitions.

He has also won the 2017-2018-2019 Mallorca Architecture Awards for the refurbishment of the Farinera de Can Suau, Llubí.

Passionate about Mediterranean architecture, both popular and contemporary, he considers it as a basic reference when conceptualizing his architecture.