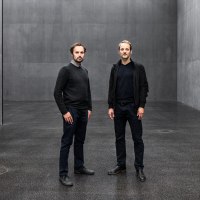 Richter Musikowski is an architectural studio located in Berlin, founded in 2012 and directed by the architects Jan Musikovski and Christoph Richter.

Jan Musikovski was born in Magdeburg in 1974 and in 1994 studied architecture at the Bauhaus-Universitat in Weimar. During 1998 Musikovski also studied at Virginia Tech in Washington DC and in 2001 he obtained a Bauhaus-Universitat diploma in Weimar. After his studies he worked in different architecture studios until 2005, when he became a member of the Architektenkammer Berlin. In 2010 he started working at the architecture faculty in Dresden and in 2012 he founded Richter Musikowski together with Christoph Richter.

Christoph Richter was born in Dresden in 1982 and in 2002 began his architectural studies at the Technical University of Dresden, graduating in 2010 from the same school. In 2010 he started working at the architecture faculty in Dresden and in 2012 he founded Richter Musikowski with Jan Musikovski. In 2015 he started to be part of Architektenkammer Berlin.