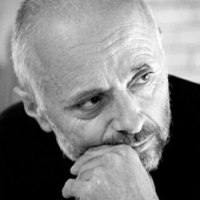 Mario Nanni (Bizzuno, 1955)  has been designing light for 35 years. He's known as a poet of light, defined as a lighting designer, visionary and artist, but he likes to be called progettista, a word to describes "the one who makes projects". Self-taught, Mario discovered his fascination for light in the darkness of the cinema where he used to go with his grandfather. His early technical training as an electrician did the rest. In 1994, Mario founded the lighting factory Viabizzuno where he is currently the creative director. A task that he combines with the leading of  "Mario Nanni atelier" in Milan, London and Barcelona, a workshop of ideas and projects, a school of thought between technology and craft.His work is sometimes expressed by a lamp others by a light installation, and others through a book or an everyday object. His work can be seen in homes, offices, museums, public squares, retail showrooms, art shows, public spaces and ephemeral installations.

He works internationally with renowed architects such Peter Zumthor, Kengo Kuma, David Chipperfield, MVRDV, among many others.